Cincinnati Bengals wide receiver John Ross III has left training camp to take care of his son ... after his 3-year-old and the child's mother both tested positive for coronavirus.

Ross did not attend practice on Tuesday as he flew back to Los Angeles to help care for his family, according to NFL Network's Tom Pelissero.

The timing isn't exactly ideal for the 24-year-old speedster --he's been hoping to have a breakout season with Cincy after 3 injury-plagued years in the league.

Ross was selected with the 9th overall pick in the 2017 Draft after flashing some insane speed. He's shown real potential on the field but injuries have been a problem.

He will now be placed on the Bengals' Reserve/COVID-19 list ... and a return date has not been set.

Ross frequently posts on social media his son, Juju -- and raves about how much he loves being a father. 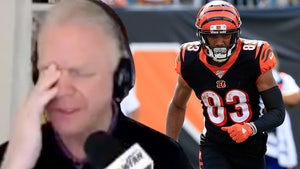