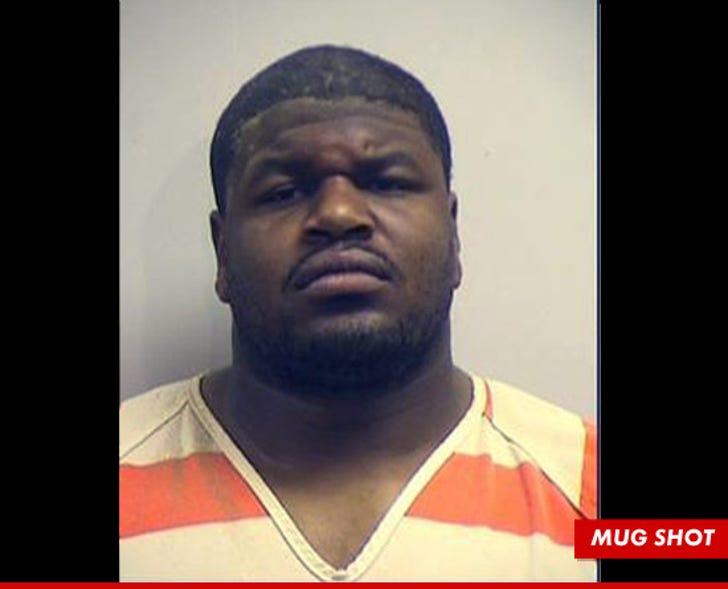 Jerry Brown, a linebacker on the Dallas Cowboys practice squad, died early this morning in a single-car accident -- and his teammate, Josh Brent, was arrested on charges of intoxication manslaughter.

According to police, Brent (see above) was driving at a high rate of speed at around 2:20 AM when his car "hit the outside curb," flipped over and came to rest in the middle of the road.

When cops came to the scene, Brent was dragging Brown away from the vehicle ... which had come to rest upside down and was on fire. Brown was unresponsive and was later pronounced dead at a nearby hospital.

Officers at the scene suspected alcohol to be a factor, so they gave Brent a field sobriety test, which he failed. His blood was later drawn at the hospital to determine his blood alcohol level. Those results are not yet known.

Brent was arrested by Irving PD and booked on a second degree felony charge at 4:14 AM and is being held without bail.

Brent pled guilty to a misdemeanor DUI charge while in college ... where he and Brown were teammates.

Dallas Cowboys owner Jerry Jones released a statement today, saying, "We are deeply saddened by the news of this accident and the passing of Jerry Brown. At this time, our hearts and prayers and deepest sympathies are with the members of Jerry’s family and all of those who knew him and loved him."

The incident comes just one week after Kansas City Chiefs linebacker Jovan Belcher killed his girlfriend and then himself.