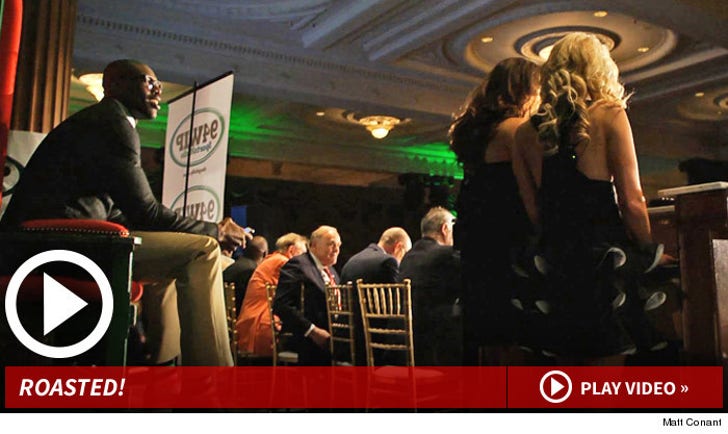 Terrell Owens was ROASTED at a charity event in Philadelphia last night ... and NOTHING was off-limits ... including his child-support issues, divorce and financial problems, TMZ Sports has learned.

The whole thing started off with some jokes about how broke he is ... with Brent Celek's ex-wife Susie Celek, along with Jon Dorenbos' wife Julie, taking shots.

-- "Since Jerry Rice doesn't need any money and T.O. is officially out of food stamps, let's get this thing underway!!!"

-- "Tonight, these people are gonna make fun of you. They're gonna say you're desperate and washed up and a cry baby ... Don't listen to them T.O., they're just bitter and jealous and RIGHT."

We're told Owens spent most of the evening playing on his cell phone while various people tried to make fun of him ... that is until comic Joe Conklin called him out in front of the crowd.

"Pay attention T.O. ... 'cause you're sure as hell not paying child support."

Conklin went on to roast about T.O.'s habit of impregnating just about everyone he meets -- "Now I see why you got the hamburger commercial, because the condom commercial fell through."