Sergey Kovalev says God saved him from a potentially deadly accident -- and now, he's vowing to show fans the "real Krusher" in his return fight this weekend.

"I said very big thanks to the God for save my life," Sergey told TMZ Sports. "I still healthy, and now he gave me opportunity again."

FYI, the boxing star recently revealed he got into a crazy car accident in Russia after his back-to-back losses to Andre Ward -- skidding into a dense forest off a 2-lane highway ... but miraculously avoiding direct impact with any trees.

Kovalev told us that close call led him to a monastery in Greece -- where he got clean in the body and mind, and got over his gut-wrenching defeats at the hands of Ward.

So -- expect a new-and-improved Krusher when he faces Vyacheslav Shabranskyy﻿ on Saturday. 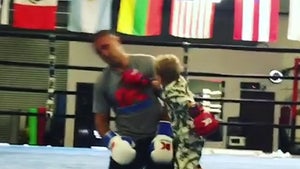 Sergey Kovalev: Andre Ward Retired 'Cause He's Scared of Me