Tyron Woodley says he spoke with Floyd Mayweather -- and the boxer told him he honestly believes there's a 70% chance the fight with Khabib Nurmagomedov actually happens.

You can see Tyron give all the details about his call with Floyd on this week's 'Hollywood Beatdown' ... where the UFC champ also reveals what Floyd's doing behind the scenes to make it happen.

"Floyd says it's the real deal."

Tyron also explains why he thinks BOTH guys in the Khabib vs. Conor fight looked terrible -- and tells us what he REALLY thinks about Canelo Alvarez's new $365-million contract.

Plus, Tyron also brings in a very special guest and drops some info about his hit song, "I'll Beat Yo Ass," that could make some people RICH! 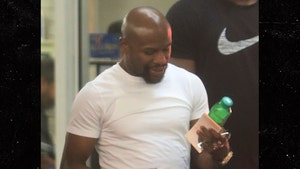