Antonio Brown says his baby mama is a liar who's caused "irreparable harm" to their daughter by falsely accusing him of domestic violence ... and says he's now seeking full custody of the kid.

TMZ Sports spoke with Brown's attorney, Darren Heitner, who says the allegation that Brown shoved his 30-year-old baby mama during a January altercation is completely false ... despite what the woman initially told cops.

As we previously reported, the woman told police she had been at Brown's home on January 17 to drop off their daughter ... and that's when things went sideways.

Brown's attorney claims the NFL star is concerned with the woman's behavior and decision to include the child in the police report ... so now he'll fight for full custody of their child.

Brown has not been arrested or charged with a crime in the domestic violence investigation. 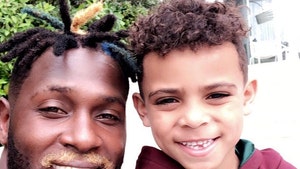