Tyron Woodley wants a crack at Khabib Nurmagomedov ... sending a message to the UFC superstar -- "We can meet at a catch weight!"

Woodley says he's just about ready to return to the Octagon after dealing with a hand issue -- and he's on a mission to win back the UFC welterweight title.

... and when that happens, Tyron says he would LOVE to fight Khabib -- a guy he has tremendous respect for as an athlete.

Woodley says Khabib has struggled to make 155 in the past and thinks it's only a matter of time before the Dagestani superstar moves up ... so why not take a fight with Woodley?

Plus, Tyron says the style matchup is perfect -- "I got the best takedown defense in the history of the sport."

But, before that can happen, Tyron says he's gotta beat up Kamaru Usman and Colby Covington ... two fights he wants BAD.

There's more in this ep of 'The Beatdown' -- Tyron calls out Kobe Bryant for calling out a little girl on the NBA star's youth basketball team.

He also admonishes Antonio Brown's entourage ... saying SOMEONE close to the NFL star needs to step up and help get his life back on track.

Check out 'The Hollywood Beatdown' on the TMZ Sports YouTube page. 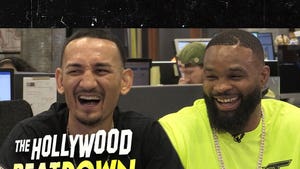