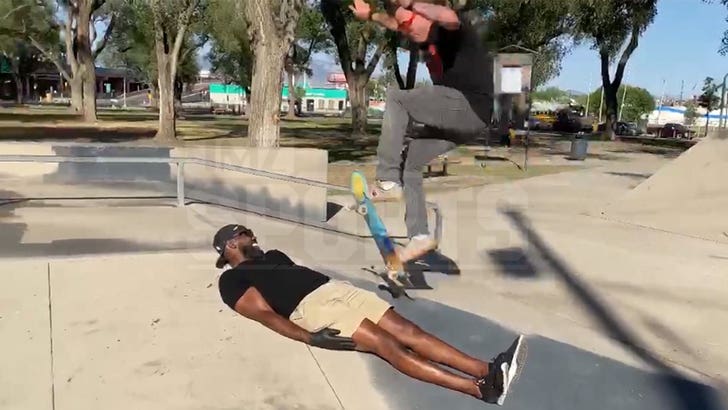 Wanna see Steve-O ollie over the greatest MMA fighter ever???

Good ... 'cause TMZ Sports has obtained video of the former "Jackass" star boarding over Jon Jones at a New Mexico skate park this week -- and it's both awesome AND terrifying!!!

Check out the footage ... Jones laid down on a ramp and let Steve-O skate over him -- and the first attempt nearly cracked Jon's ribs, it's pretty damn scary!!

But, Steve-O eventually nailed the trick ... and Jon couldn't have been happier.

There's much more in the clip ... Steve-O can REALLY skate -- and Jon even tried his hand at going up and down a ramp a few times, too!!!

By the way, Steve-O tells us he was scared out of his mind to let Jon on the board, saying, "a wave of panic swept over me for the possibility that I might be responsible for the career-ending injury of the greatest mixed martial artist of all time."

By the way, if you're wondering why the duo are spending time together in New Mexico ... it's all for a great cause.

Steve-O joined the UFC champ to help his efforts with the C.A.R.E. project ... raising money and support for communities impacted by the COVID-19 pandemic in New Mexico.

Steve-O is a massive UFC fan and has been a regular at UFC fights for years.