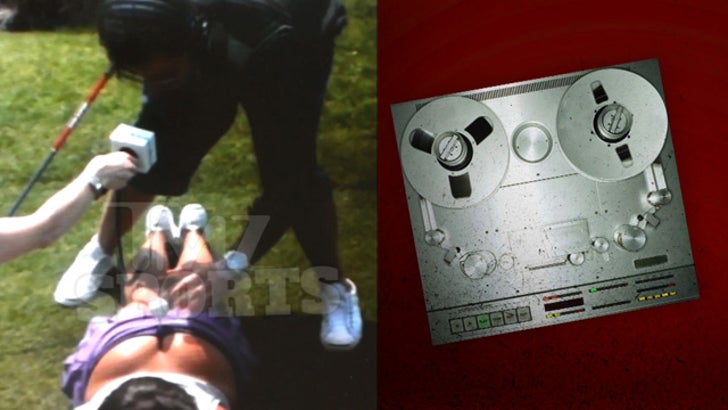 Liz Dickson knew damn well her ass would be IN PLAY when she agreed to put a tee in her butt for a golf stunt at a Playboy event in 2012 ... and TMZ Sports has obtained audio that proves it.

We broke the story ... Liz filed a lawsuit against Playboy claiming she thought comedian Kevin Klein would only be POSING with his golf club for a photo op ... and was shocked when he took a whack.

But in audio recorded on the day of the stunt, Kevin makes his intention crystal clear -- saying to Liz, "Would you allow me to place a golf ball on a tee in your butt and attempt to tee off a shot right now down this first fairway?"

Liz initially responds, "Maybe" ... and then says, "What did I get myself into?"

Moments later, she lays down on her stomach and allows a member of Klein's team to place a tee in her butt ... and seems to be 100% in on the stunt.

At one point Klein asks, "How does the golf tee feel in the butt?"
Liz responds, "Ummm ... it's poking my butt."

Eventually, Klein takes a swing and smacks Liz in the cheek. When asked if it was painful, she says "it hurt" ... but never seems to object to Kevin taking a swing in the first place.

Liz is suing for more than $500k in damages, claiming she never signed off on the stunt -- but the audio seems to tell a different story.