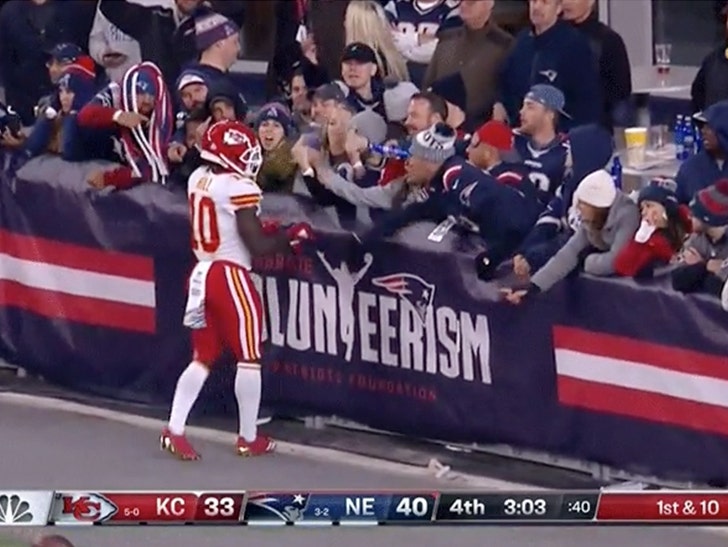 1:14 PM PT -- The Foxborough Police Dept. has identified the suspect as a 21-year-old man from Massachusetts.

Cops say the man will be charged with 2 crimes -- disorderly conduct and "throw object at sporting event."

A court date will be set.

Cops say they were able to ID the suspect using surveillance video from the stadium.

12:39 PM PT -- Tyreek Hill wants the fan who threw beer at him to be arrested and charged, according to Hill's agent, Drew Rosenhaus ... who spoke to Adam Schefter.

“Players have to be protected. We want that fan to be prosecuted.”

10:44 AM PT -- The Patriots say the fan has been identified and has now been BANNED FOR LIFE from attending Patriots games at Gillette Stadium.

The Patriots add, "The matter has been turned over to local law enforcement and the fan will be sent a letter of disinvite to all future events at Gillette Stadium.”

The Foxborough Police Dept. is investigating the embarrassing moment at Gillette Stadium on Sunday when a Patriots fan doused a Kansas City Chiefs player with beer after a TD ... TMZ Sports has learned.

Cameras were rolling as Tyreek Hill scored a 75-yard touchdown with 3:03 left in the 4th quarter and then came face-to-face with a pack of Pats fans who were flipping him off and shouting insults.

One of the people in the group -- who appears to be wearing a Pats jersey -- threw his Bud Lite at Hill's face. Terrible moment, but props to Hill for not fighting back (you know he wanted to).

Now, the Foxborough PD tells us ... they're looking into the incident and would like to speak with the fan to find out what happened.

Hopefully, they track this scumbag down and ban him from the stadium for life -- because players shouldn't have to deal with this crap.

In fact, Reggie Bush has already spoken out about it on Twitter, saying, "Now if he smacked the piss out of one of you clowns you would be all over social media crying ready to sue him!"

"Fans need to chill before somebody get hurt! You don’t have to like the opposing team but you need to show respect or don’t go!"

The end of that touchdown catch by #Chiefs Tyreek Hill not exactly a banner moment for #Patriots fans. Especially the Bud Lite to the face. pic.twitter.com/cYS4RC7I6H

We reached out to the Patriots for comment -- so far, no word back. 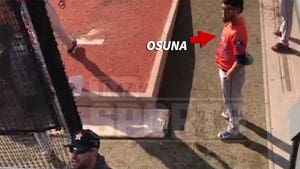 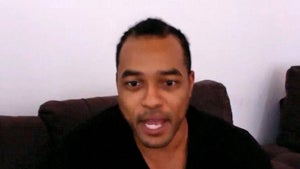