TB12 on Wednesday officially joined the #AllIn movement -- a fundraiser started by 76ers partner Michael Rubin aimed at giving away amazing prizes in exchange for coronavirus donations -- and what Tom is offering up is pretty crazy.

The new Tampa Bay QB says the winner of his charity auction will score a trip to Florida for his first game as a Buccaneer and receive the FULL VIP treatment at Raymond James Stadium.

Tom also says the lucky auction winner will get his first Bucs jersey, his game-worn cleats from the day AND dinner with the GOAT after the game!!!

As for who Brady challenged to join him in the charity efforts ... he picked out his wife, Gisele, his buddy, Drake -- and, interestingly, NFL commish Goodell.

Of course, Brady and Goodell haven't had the best relationship over the years ... Roger famously suspended him FOUR GAMES back in 2015 for allegedly deflating footballs.

But, is this an olive branch from Tom?? 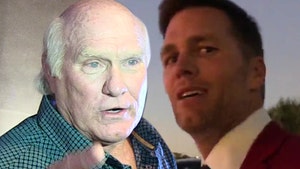