7:54 AM PT -- The Bucs QB was candid with Stern about his relationship with Donald Trump ... saying he was "uncomfortable" when his friendship with DT became political.

"The whole political aspect came, and I think I got brought into a lot of those things because it was so polarizing around the election time," said Brady, who once famously had a Make America Great Again hat in his locker.

"It was uncomfortable for me because you can’t undo things, not that I would undo a friendship, but political support is a lot different than the support of a friend."

Brady says Trump even tried to get him to speak at the 2016 Republican National Convention ... but TB12 turned him down.

"I didn’t want to get into all the political," Brady said, "because there’s zero-win in regards to any of that."

6:56 AM PT -- Brady just revealed he and Gisele had relationship problems toward the end of his New England career ... saying straight-up the model "wasn't satisfied with our marriage."

Brady told Stern ... Gisele wasn't happy with the way Brady was putting so much attention toward football and his business deals while leaving her to handle their children and housework.

"She didn't feel I was doing my part for the family," Brady said. "She felt like I would play football all season and she would take care of the house and all the sudden when the season would end, I would be like, 'Great, let me get into all my other business activities. Let me get into my football training.'"

Tom Brady on marriage with Giselle, says he stopped going to OTAs the past few years because Giselle wanted him to start carrying more of the load at home. “I had to check myself.” Says she “wasn’t satisfied with our marriage.” pic.twitter.com/2ktCSzTh8r

"And she's sitting there going, 'Well, when are you going to do things for the house? When are you going to take the kids to school and do that?' And that was a big part of our marriage. I had to, like, check myself. Because she's like, 'I have goals and dreams too.'"

Brady says things got so rocky, Gisele actually wrote him a letter explaining to him her problems with their relationship ... and says the two even went to therapy over it all.

Eventually, Brady skipped out on Patriots OTAs over the issues ... but made it pretty clear to Stern the problems have since been ironed out.

6:24 AM PT -- Brady refused to rip Bill Belichick over his Patriots departure to Stern ... saying there was "absolutely" ZERO resentment toward the New England coach.

In fact, Tom praised The Hoodie's loyalty ... and claimed there's a lot of "wrong assumptions" out there about his relationship with BB.

As for when Brady knew he was probably done in New England, the QB told Stern he had a feeling before last season he was likely on his way out.

What happens if something breaks in Tom Brady's new mansion in Tampa??

HE GETS DEREK JETER'S ASS TO COME FIX IT!!!

Brady spoke all about being Jeter's newest tenant in Florida with Howard Stern on Wednesday morning ... and TB12 couldn't have been happier with his new landlord.

The Buccaneers QB says he turned to the Yankees legend on super-short notice to get him a proper place ... and he says Derek has more than delivered with his Tampa Bay pad.

In fact, Brady -- who says Jeter even left the place furnished for him -- said of the whole process, "It's nice to rent!"

"I would definitely say you get all of the benefits with none of the responsibility. So I'm totally cool with this."

Brady says the openness of the home is taking some getting used to ... back in Massachusetts, he says it was nearly impossible for fans to drive up to his door.

But, now, he claims boats pull up to his backyard and people are congregating outside on the streets.

"It's a little different," Brady said. But, the QB added, "Derek did a pretty good job of screening it."

As for monthly payments, Brady says he and Jeter had NO discussions of that ... claiming their reps got all the dollars and cents talked out before he moved in.

Yeah, still great to be rich! 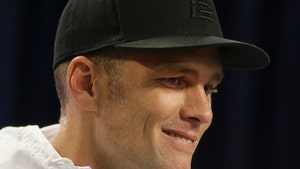