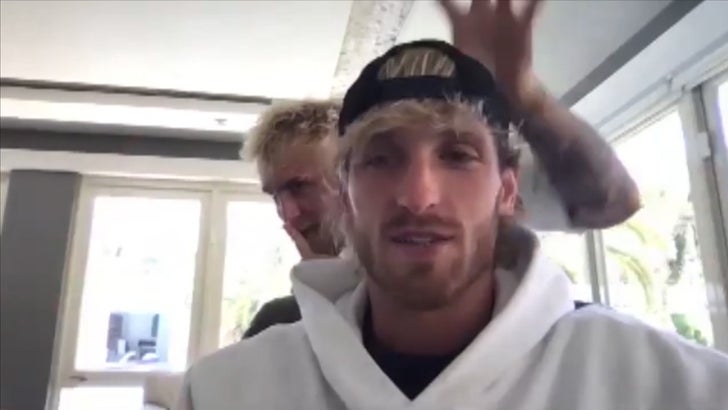 Logan Paul says he and his brother are taking no chances after Floyd Mayweather's "I'll kill you" threat ... telling TMZ Sports they now have security watching them "at all times."

Floyd dropped the menacing warning to Jake Paul after the younger Paul bro famously stole the boxer's hat during a confrontation at the Logan-Mayweather pre-fight news conference in Miami last week.

Most considered it an empty threat -- after all, nobody really thinks Floyd's going to commit murder over a baseball cap -- but Logan tells us he's taking absolutely no chances.

"Dawg, when you have a guy with the resources and the wealth that Floyd Mayweather has and the connection and the network and he's saying s***, 'I'mma kill that motherf***er' -- kill?! Death?! You're gonna kill my brother over a f***ing hat?! Yo, we take that s*** seriously man!"

Logan says the Paul bros now have bodyguards with or around them "everywhere at all times."

Logan, though, says he and his brother will NOT be going to cops or filing anything in the court system over the threat -- the older Paul brother said that idea is straight-up "bitch s***, bro."

There's more ... Logan also says there's a chance he makes $20 MILLION for fighting Floyd -- and he also explained why a fight card that would feature both him and Jake vs. Mayweather would never happen.

By the way, Jake also made an appearance during our interview with Logan ... and watch the clip -- "gotcha hat" clearly ain't going anywhere anytime soon!