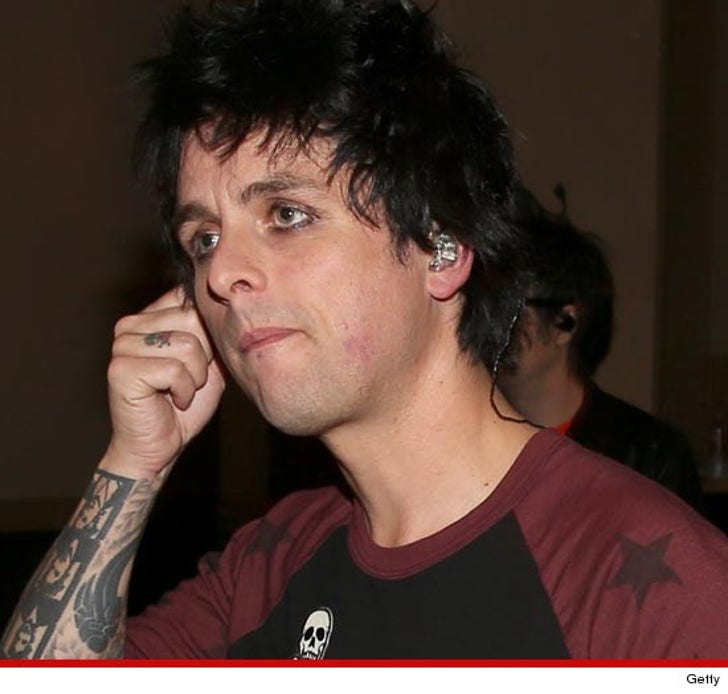 The news comes just two days after Armstrong went ballistic in Vegas during a performance at the iHeart Radio Music Festival. He was videotaped screaming obscenities, slamming Justin Bieber and violently smashing his guitar on-stage.

The band's rep tells TMZ, "Green day wants to apologize to those they offended at the iHeartRadio Festival in Las Vegas." 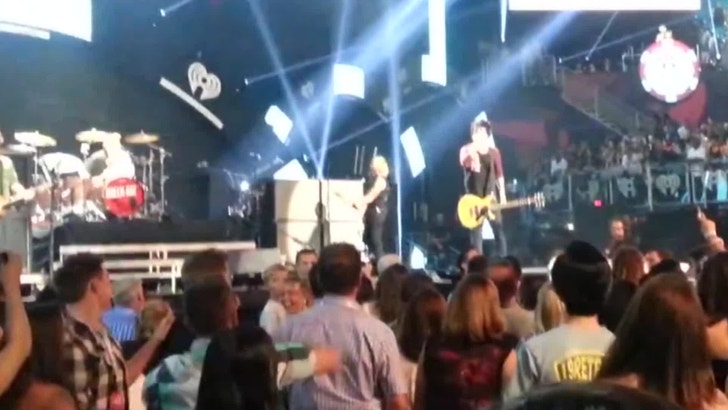 The rep adds, "The band regretfully must postpone some of their upcoming promotional appearances.“ 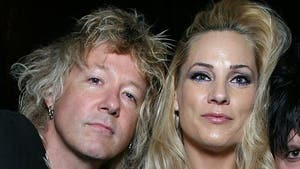 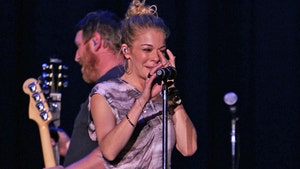 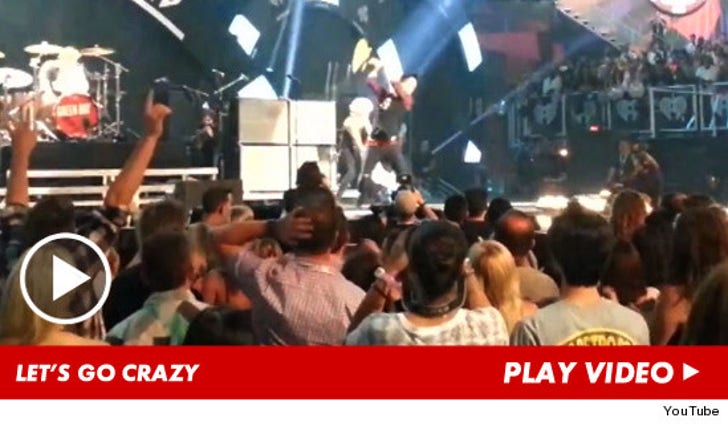 Green Day front man Billie Joe Armstrong did not take kindly to having his set at the iHeartRadio Music Festival cut short last night in Las Vegas ... so he went on an expletive-laden rant on stage before smashing his guitar and storming off.

According to reports, the show was running 25 minutes behind schedule and rather than let the show run longer, organizers decided to cut down Green Day's set.

When given the one minute warning, Armstrong went ballistic, screaming, "I'm not Justin Bieber, you motherf**kers! You gotta be f**king joking. I got one minute, one minute left. Now I got nothing left. Let me show you what one minute f**king means" ... before slamming his guitar into the ground.

It's unclear why Armstrong invoked Bieber's name -- he didn't perform last night and is not scheduled to appear at the festival tonight either. 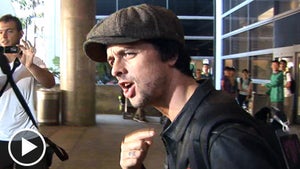 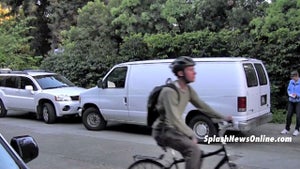 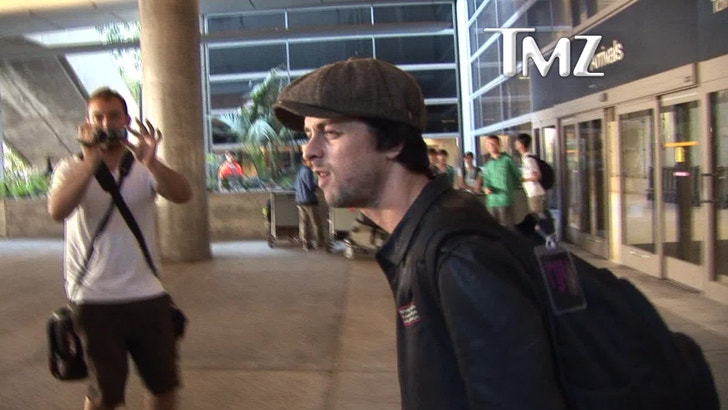 Green Day frontman Billie Joe Armstrong is out of the hospital and back in L.A. following a medical scare ... and upon his arrival Monday, the singer mouthed to TMZ that his voice is completely gone.

The band was supposed to play a show in Italy this weekend, but the guys were forced to cancel the gig when Billie Joe was "rushed to the hospital due to illness."

The rest of the band released a video statement saying, "We're beyond devastated ... We're as sad as you guys are. Billie's extremely upset about it."

The guys never revealed the nature of Armstrong's illness ... but now it's obvious, it has something to do with his throat.

On his way out of the airport, we asked Billie Joe about some other stuff ... but for some reason, he didn't have much to say. 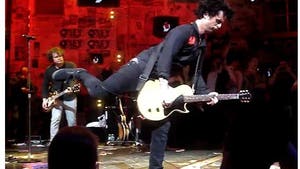 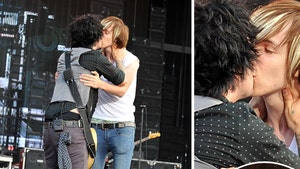 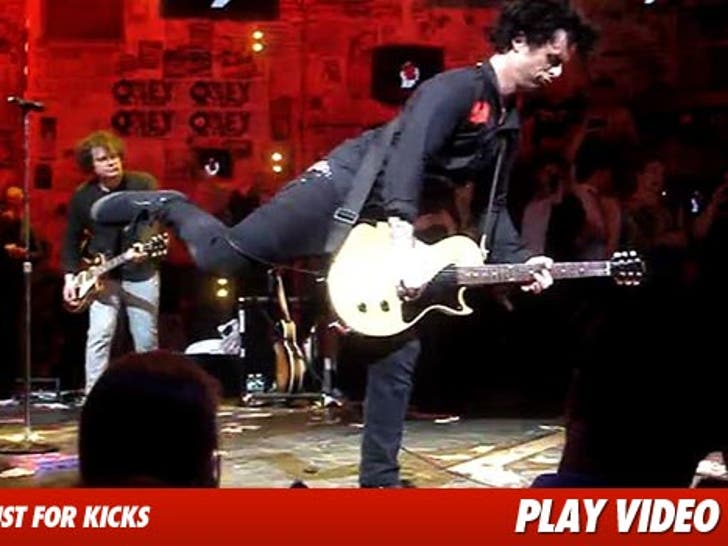 The guys from Green Day closed down their final performance of their Broadway show last night in true epic rock form -- grabbing their instruments and blasting out hit after hit for nearly an HOUR. 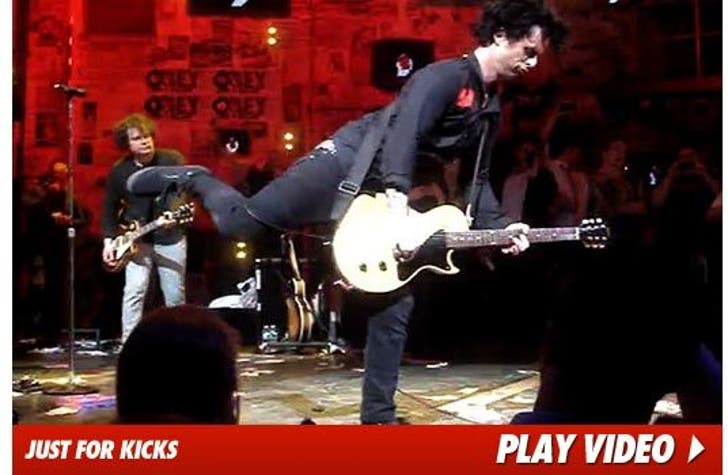 The 10-song set included "Longview," "Burnout," and "Welcome to Paradise" -- as well as "Holiday" and "Letterbomb" from the "American Idiot" score.

Now THAT is how you close down a show! 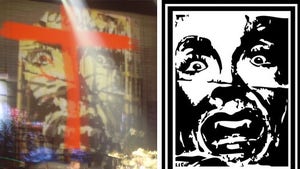 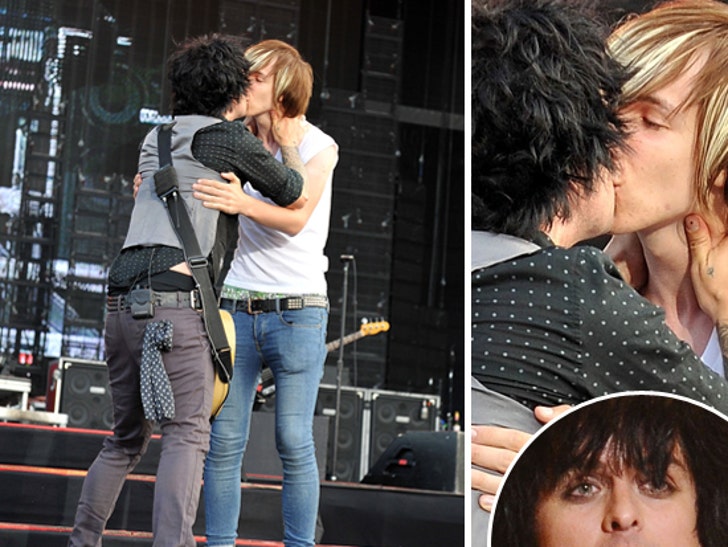 Green Day lead singer Billie Joe Armstrong pulled an Adam Lambert and kissed a male fan on the lips while on stage at a concet in England on Wednesday. 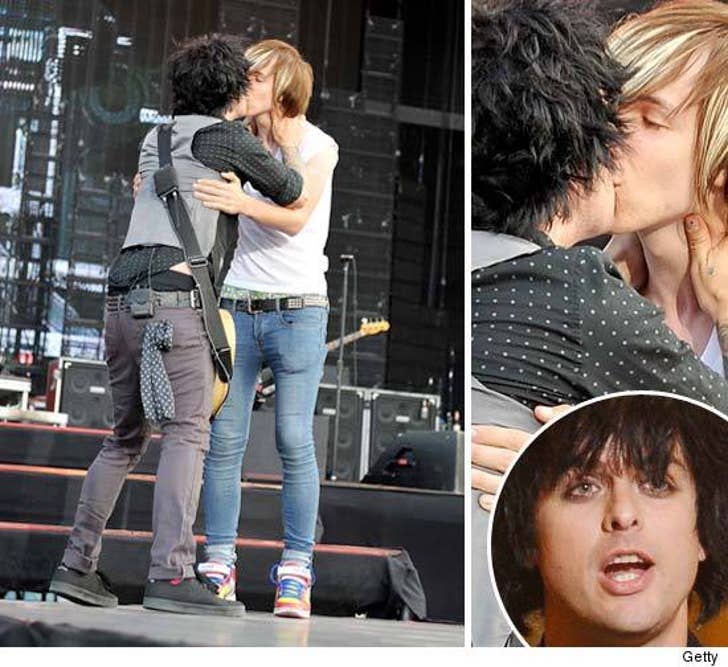 No word if "GMA" will cancel any future Green Day performances. 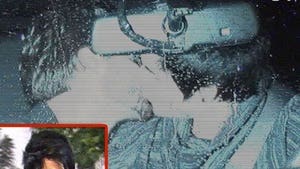 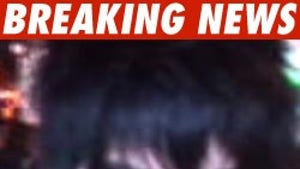 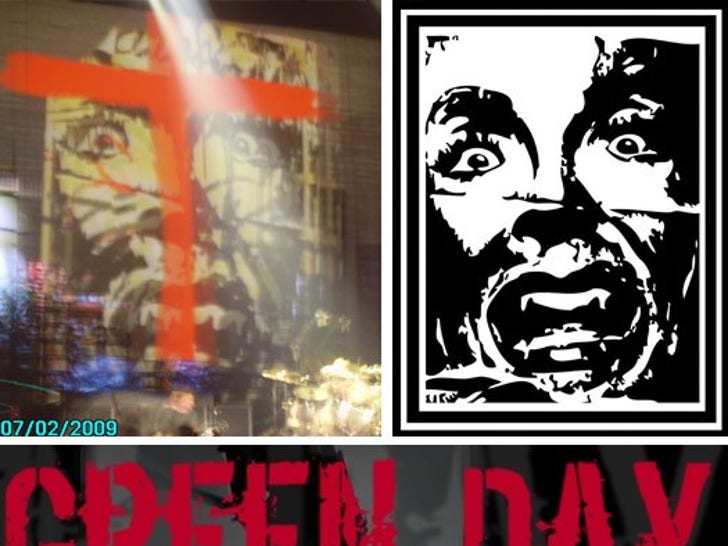 The guys from Green Day are getting sued by an artist who is accusing the band of stealing a facial feature he created. 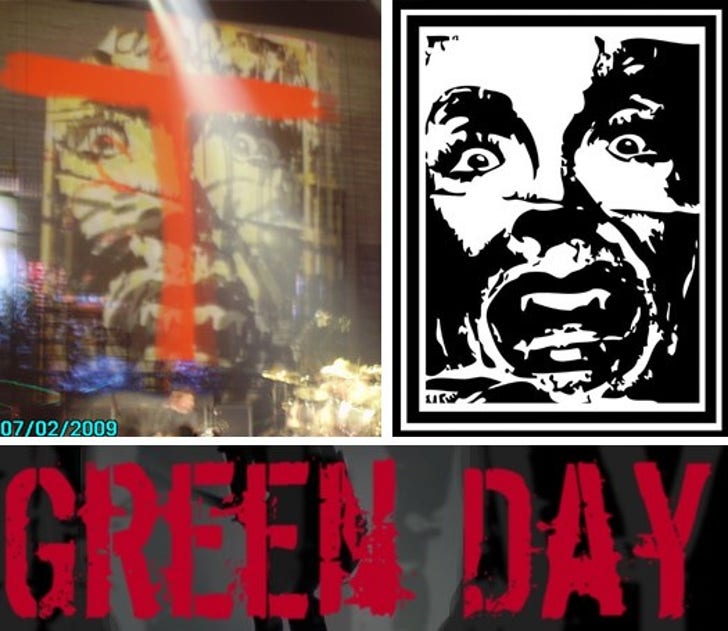 The image in question shows a frightened, fang-toothed face -- which was plastered on the Green Day website in 2009, featured in a music video and displayed at concerts (left).

Artist Dereck Seltzer claims he created the face years ago (right) and even got it copyrighted -- and Green Day never got his permission to use it, so he filed a lawsuit in Los Angeles federal court.

Green Day's lawyer, Don Passman, tells TMZ, "Green Day received Mr. Seltzer's image from a responsible company and was unaware that there could be any copyright or other issues." 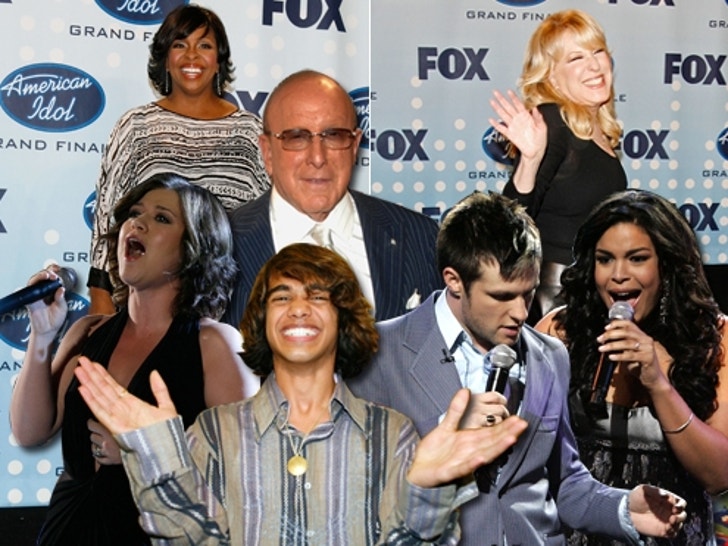 With performances by Gladys Knight, Smokey Robinson and BeBe and CeCe Winans, last night Jordin Sparks was crowned the latest "American Idol" on what seemed more like a "Solid Gold" rerun than the finale of the most watched show on television! Nothing says 2007 like ... Bette Midler?! 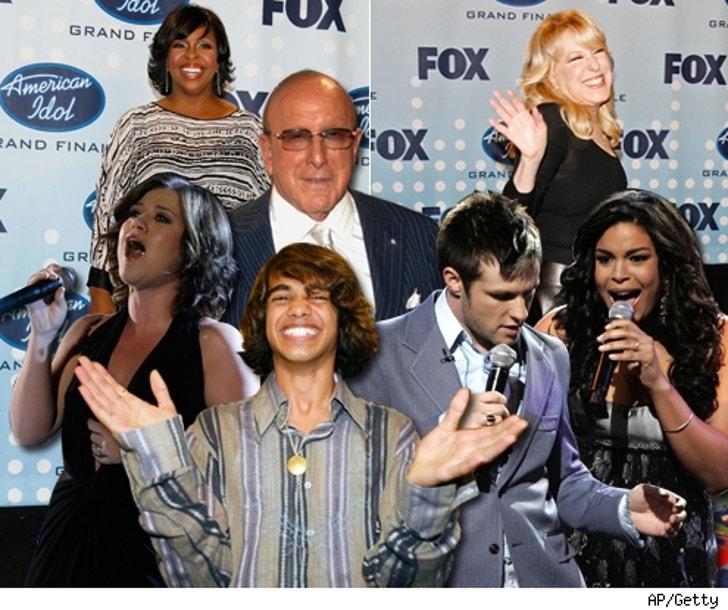 TMZ has the rundown on last night's eight-hour live broadcast:

The finale rambled on longer than a Paula Abdul interview! Something's broken on Paula -- and it ain't her nose!

The "Golden Idol Awards" -- Um ... No! Making fun of an infantile overweight woman dressed like Big Bird and two peculiarly challenged young men does nothing for "Idol's" industry cred ... who knew minstrel shows were making a primetime comeback? Why do producers want to add a crappy awards show to a crappy award show?

Gladys Knight -- She's gotten rid of the Pips -- and all facial expression! Thankfully, the only thing Botox didn't kill was her voice. Girlfriend needs an eyelash/weave wrangler. 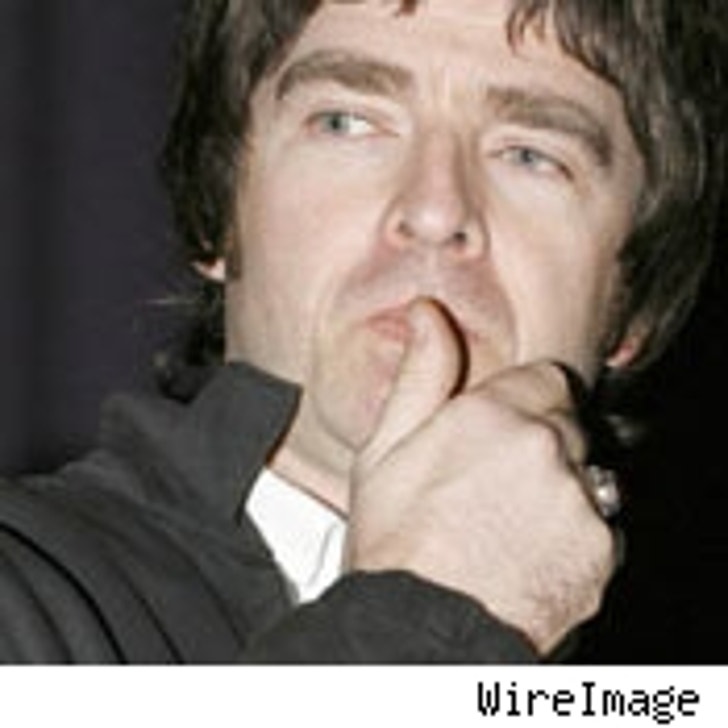 Noel Gallagher of Oasis has never been one to shy away from self-promotion, and the one thing he seems to like to do even more than tooting his own horn, is to denigrate others. His latest targets include President Bush, Tony Blair, Green Day and Kate Moss' fiance Pete Doherty.

In an interview you'll find in the latest issue of Stuff Magazine, when asked his opinion of Mr. Doherty, Noel says: 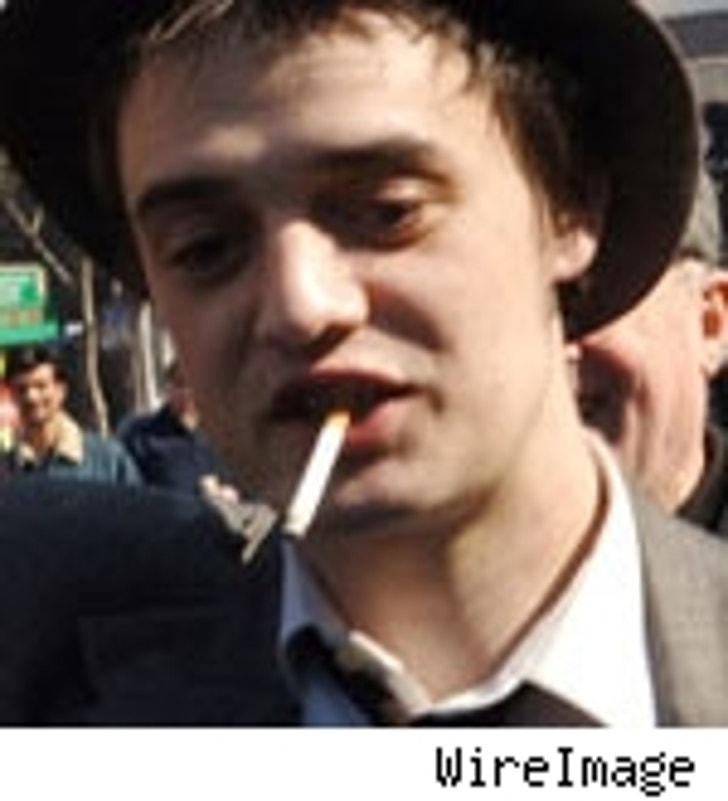 "Overrated. He's marginally talented, but not anywhere as good as me. If he wasn't [BLANK]-ing a supermodel, no one outside of NME would give a s@*! about him."

Ouch, tell us how you really feel Noel. Kate's man, however, isn't Noel's only target. Noel also slags his bandmates for ingesting cheap drugs and takes on the boys in Green Day. Noel seems to think Billy Joe and company need to be knocked off their high horse:

"They consider themselves to be - and I quote - "a kick-ass rock 'n' roll band." They could not be less kick-ass if they tried." 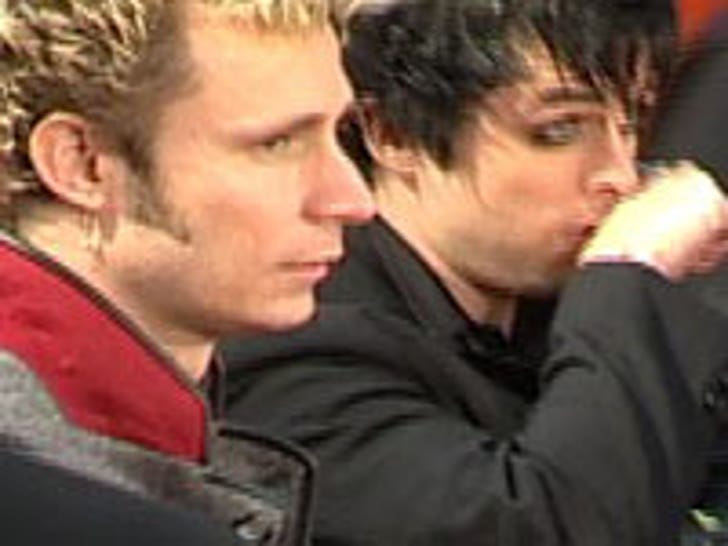 Wait, that's not all ... Noel goes even further and calls Green Day musical thieves, saying, "they ripped off one of my songs!" The singer believes that Green Day's big hit, "Boulevard of Broken Dreams," has a strikingly similar arrangement to Oasis' smash, "Wonderwall." Wow, it's one thing to say a band is overrated, but quite another to say they've ripped off your tune. We'll see if Billy Joe (also not afraid to speak out) responds.

Of course, Noel doesn't seem to care who responds to his rants, he just seems like to hear himself talk. Get the rest of Noel's unvarnished self-indulgence in the January issue of Stuff, on newsstands now.

I heard a long time ago that Green Day was planning on turning "American Idiot" into a movie. Is that still happening? 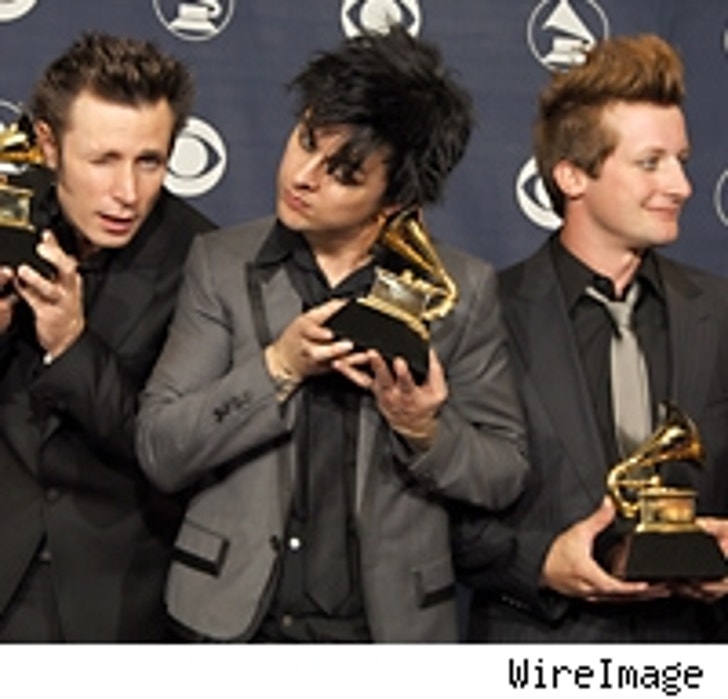 Melody, people have been very quiet about this could-be movie for a while, but it seems as though it will in fact come into fruition.

With ideas for the flick pouring in, Green Day frontman Billie Joe Armstrong confirmed to MTV in an interview over the summer that "it's definitely going to happen." But don't expect to see the band members on screen -- they're leaving that to the professionals.

Roecker, who directed Green Day's soon-to-be-released documentary based on their 2004 Album 'American Idiot,' is a prominent figure in the LA punk scene. Known for his work in music, fashion, writing and promoting bands like Green Day, Rancid, and The Go-Go's, Roecker is finally set to release his anarchic masterpiece. This is a true example of how far one punk will go to rebel against the aspects of what American society cherishes, and he hates -- decadence, glamour, ego and beauty.

The film takes place in the year 3069 after the world has been destroyed from ozone depletion. Leftover tribes of people roam for food when one member comes across the book 'Helter Skelter,' and bumps into "Charlie" after coming out of a bad LSD trip.

The film then flashes quickly to 1969 where the tribe is introduced to a different crowd, actress Sharon Tate and her hairdresser who are the ultimate representation of decadence. The piece de resistence: The murder scene plays out while pop tunes blare in the background.

Billie Joe and Tre' Cool from Green Day, Travis Barker formerly of Blink-182, Nelly Pozbourne (who bears a strong resemblance to Kelly Osbourne), and Jane Weidlin of the Go-Go's all do voices of the creepy claymation characters.

Roecker's father was a Hollywood director who worked on projects like 'The Little House on the Prairie.' In this case, the apple does fall far from the tree.

Hosted by L.L. Cool J, the event aired live on FOX as it has since its inception 11 years ago.

Among the top nominees were 50 Cent with eight nominations, Mariah Carey with seven, and Green Day with six.

Billboard Awards are determined by album sales as measured by Nielsen SoundScan and radio data compiled by Nielsen Broadcast Data Systems. So while there aren't typically many suprises as to who wins, anything can happen when you get this many rockers under one roof.