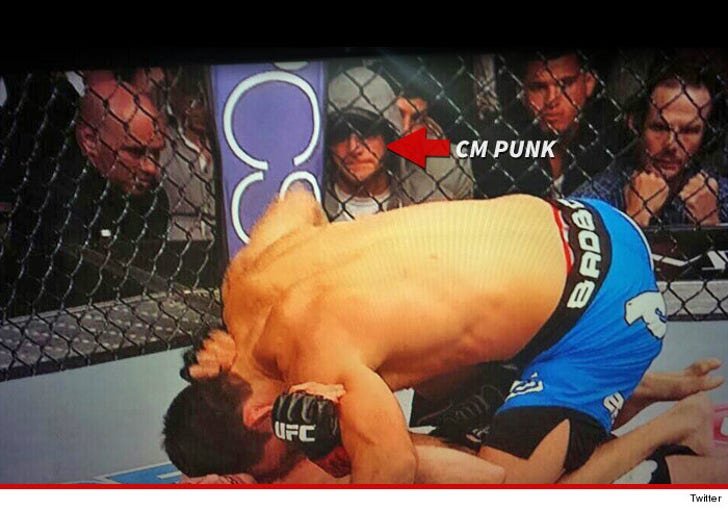 CM Punk's first public outing since walking away from the WWE last month was Saturday night in Las Vegas at UFC 170 ... and even though he was sitting ringside with the company's head honcho -- Dana White says they didn't talk one word of business.

TMZ Sports spoke with Dana White about his visible hangout with Punk seen by millions on Pay Per View ... and the UFC Prez says they were just watching the fight as friends.

Dana adds, "He is a friend and a fan. We have literally never talked about wrestling or fighting or anything else work related since I've known him." 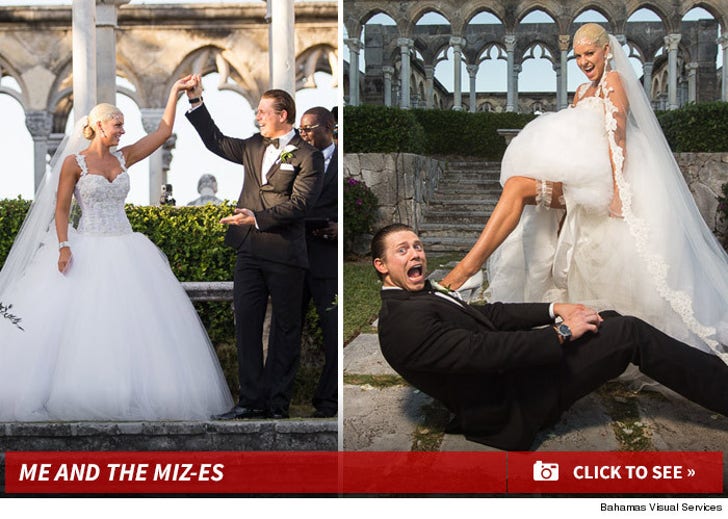 Former WWE Champ The Miz tied the knot this week in the Bahamas ... marrying his longtime girlfriend/former Diva Maryse Ouellet -- and it sounds like the whole event was pretty baller.

TMZ Sports obtained photos of their nuptials -- which took place Thursday at the One and Only Ocean Club -- where they said "I Do" in a garden overlooking the ocean and filled with 12th century ruins.

We're told a private party was held for the newlyweds afterward at the Atlantis resort ... and they were surrounded by giant aquariums filled with sea life.

WWE Superstar Zack Ryder was on hand for the special occasion (pictured below) ... as well as former WWE Diva Kelly Kelly. 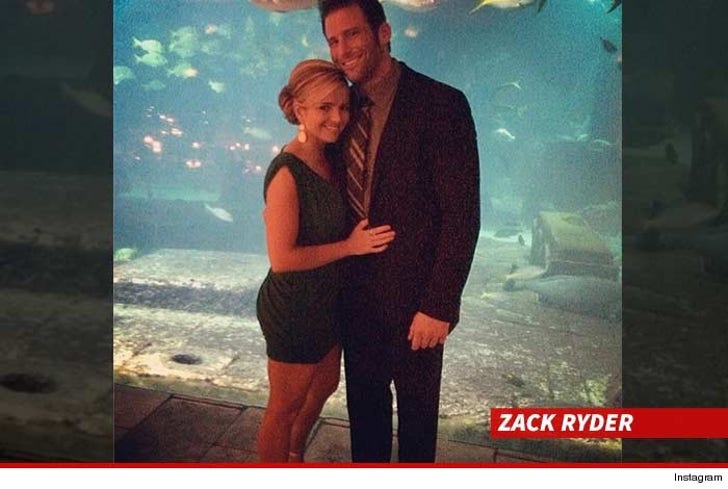 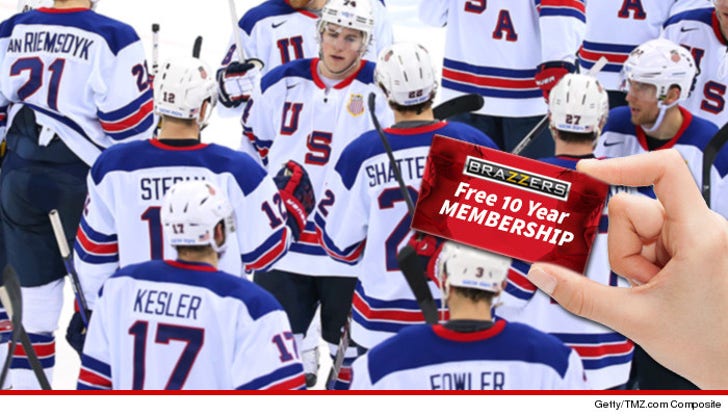 Don't screw it up Oshie. 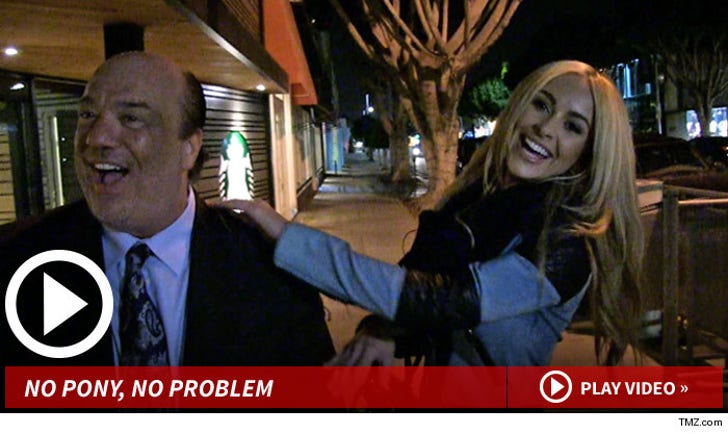 A freshly-shorn Heyman was cruising Hollywood Friday night with supermodel Ellie Gonsalves ... when he explained how he came to grips with the self-scalping.

The wrestling villain -- who happens to be Brock Lesnar's business adviser in real life -- also told us why the ex-UFC champ won't be making any trips to L.A. in the near future. 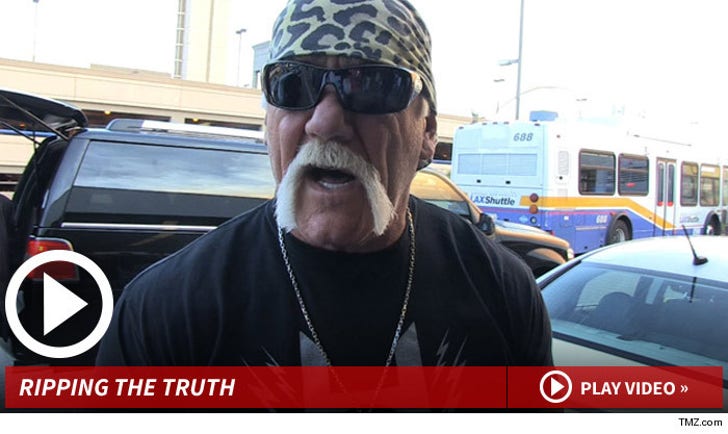 Hulkamaniacs, brace yourselves ... Hulk Hogan just admitted to lying you as a child -- telling us his shirt ripping days weren't quite pure 'cause sometimes ... HE CHEATED!!!

But when we asked Hulk about the iconic shirt-ripping thing he used to do back in the day ... Hogan fessed up and told us what he sometimes did to help tear it off so easily ... and it's kinda, sorta heartbreaking.

What's next? He didn't take his vitamins or say his prayers either?! 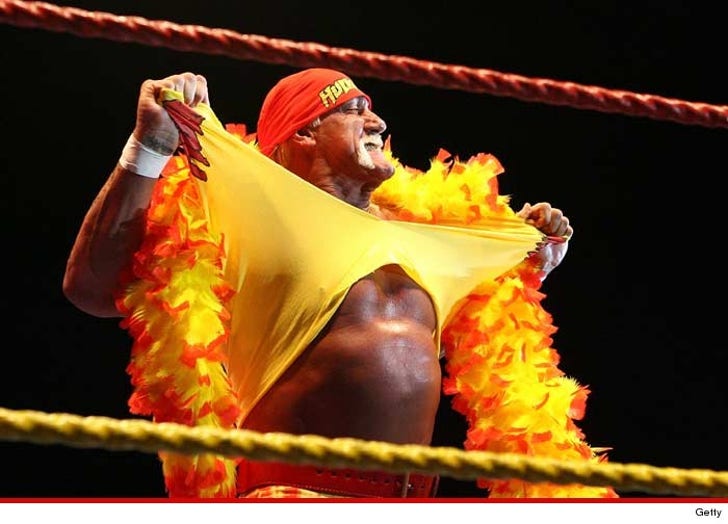 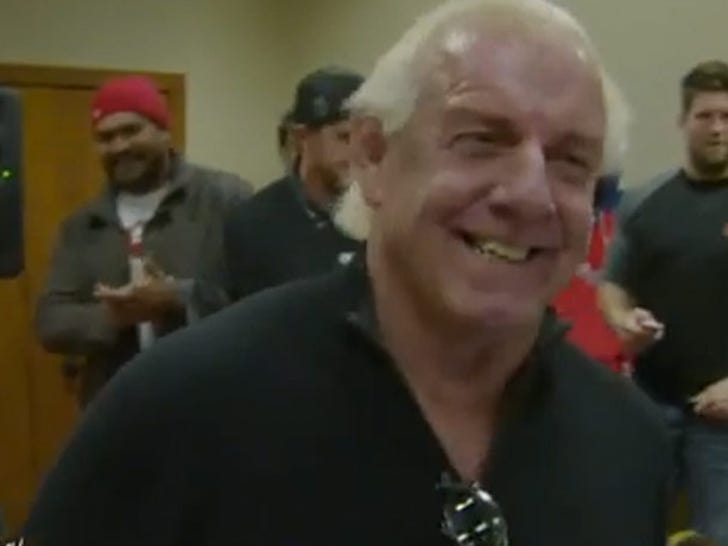 Ric Flair -- who lives in North Carolina -- says he's received DEATH THREATS from insane Carolina Panthers fans who are furious he gave a pep talk to the 49ers last week.

As we previously reported, Flair visited the 49ers the night before their playoff battle with the Green Bay Packers ... and since the 49ers won, they're playing Carolina this weekend.

But Flair's rep says ... some Panthers fans are PIIIIIISED ... claiming Ric betrayed the state he calls home -- and some people have been making threats to kill the 64-year-old.

The rep explains, "We know fans are passionate about their teams, but some of the choice language we have been receiving is scaring off our interns."

As for this weekend's big matchup between CAR and SF -- Flair says he will not be attending the game. 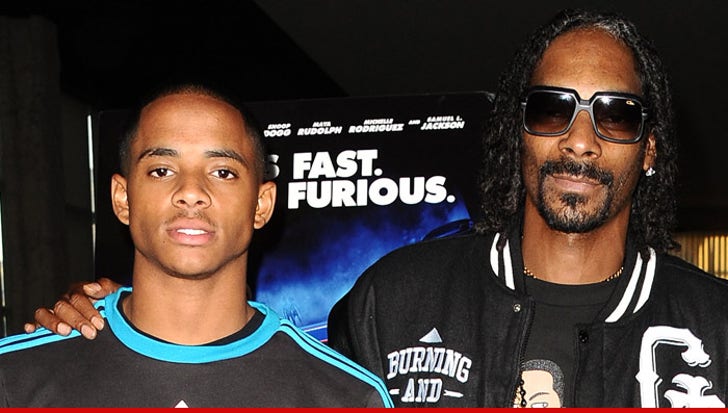 Snoop Dogg's son Cordell Broadus -- one of the top high school football prospects in the country -- has just dropped out of his CA high school ... but it's only 'cause he's moving to a better one.

TMZ has learned Broadus gave notice to Diamond Bar High School head coach Ryan Maine this week ... and informed the school he wanted to play at a higher level of competition.

FYI -- Cordell is 6'3" and 186lbs ... and is reportedly being recruited by some of the top college programs in the country including Notre Dame, Duke, LSU, Nebraska, UCLA and USC.

According to sources familiar with the situation ... the wide receiver is eyeing St. John Bosco -- widely considered one of the best high school football teams in the country.

Broadus' decision was first reported by In the Huddle.

We're told one thing influencing Cordell's decision is Nate Dogg's son -- who will graduate from St. John Bosco later this year ... but with a full scholarship to the University of Arizona.

Our sources say Cordell is also looking at other schools closer to where he lives ... 'cause he doesn't feel like making the long commute. 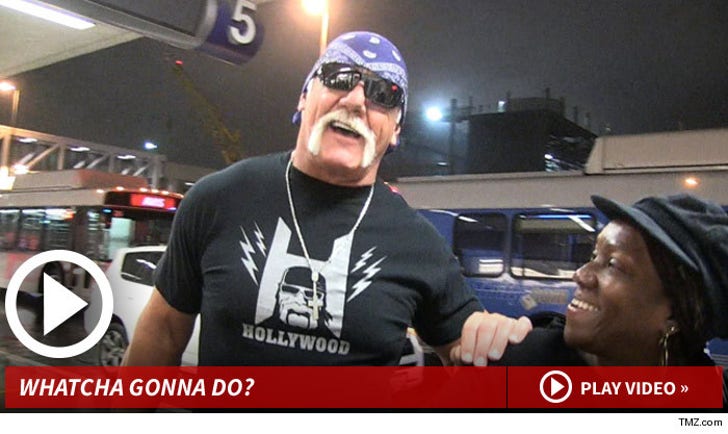 Hulk was surrounded by fans Wednesday night at LAX when we asked if he's gonna be at the 30th anniversary of 'Mania'... and Hogan said he really wants to go.

But don't get your hopes up Hulkamaniacs ... he's not looking to wrestle at the event he made famous ... Hulk says he just wants to take his wife Jennifer 'cause she's never been.

Hulk has a plan to fly under the radar though if he goes ... check out the video to hear it. 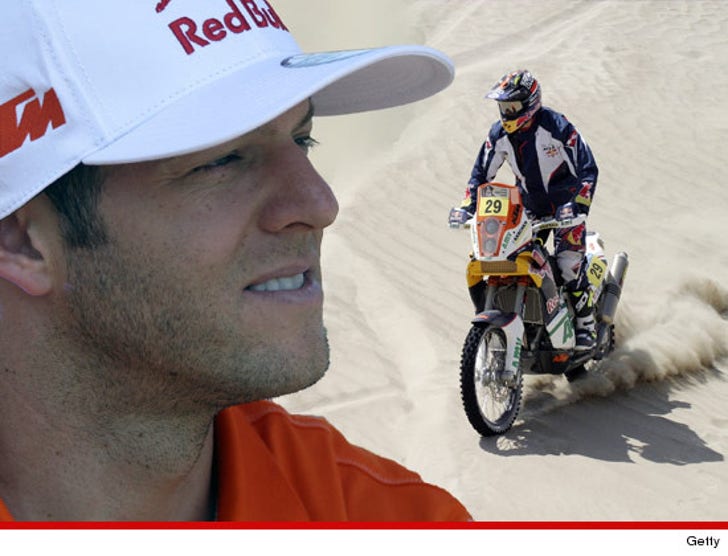 Breaking News
Kurt Caselli -- a highly decorated off-road racing competitor -- died Friday evening in Baja, Mexico ... after he crashed his motorcycle during a sandy section of the course.

According to a rep for the 2013 Tecate SCORE Baja 1000 ... Kurt died from injuries sustained in the crash while en route to a hospital in Ensenada.

The rep says Caselli "apparently lost control of his KTM motorcycle in a sandy, high-speed section" of the course ... adding reports claiming the crash occurred because of a booby trap are false.

Caselli was in second place near the end of the race when the accident happened. 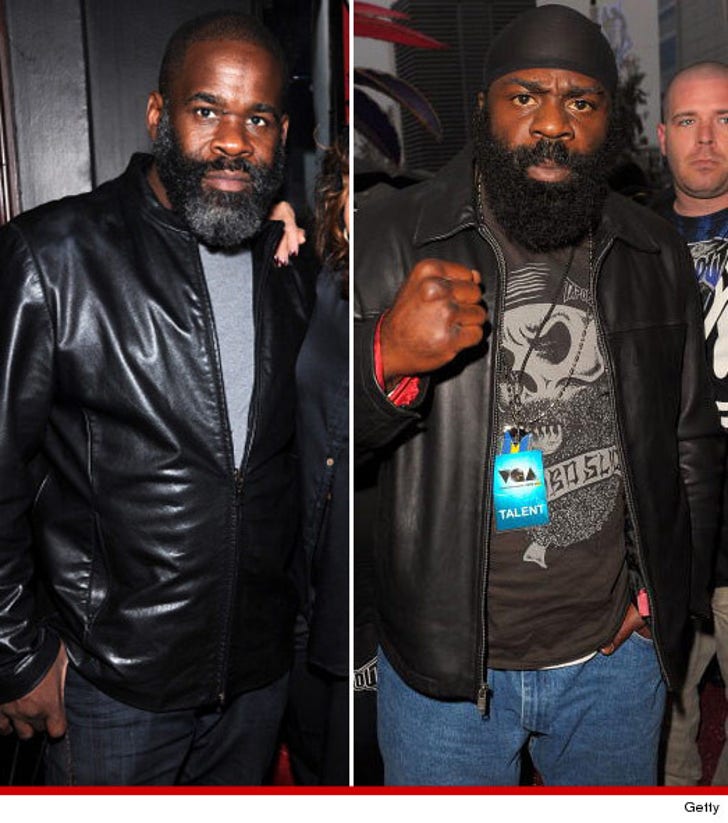 Only one of them could survive in real prison. 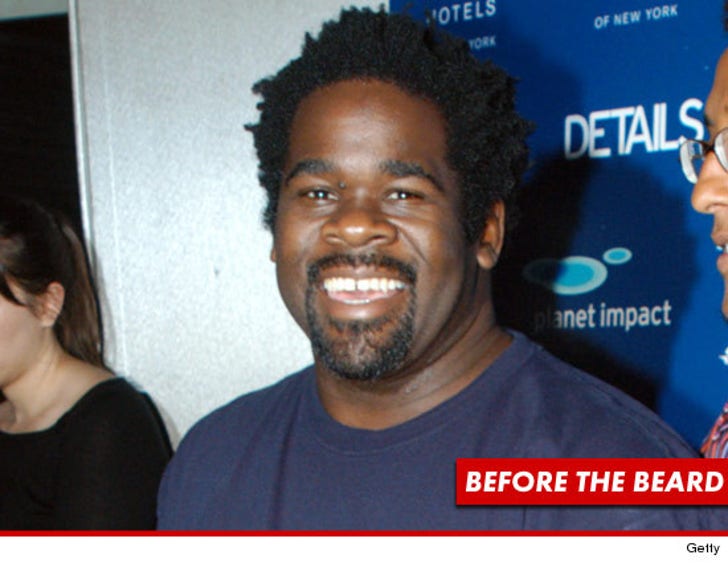 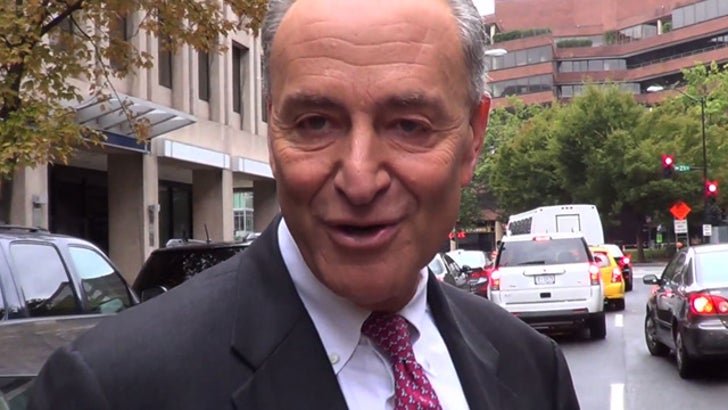 Even the esteemed Senator from New York Chuck Schumer ... knows the NY Giants suck in the worst way possible ... and tells TMZ the broken U.S. government will probably get its act together before Eli and Company will.

Sen. Schumer was out in D.C. yesterday when he was asked to predict which will happen first -- the END of the government shutdown OR the END of the Giants' pathetic losing streak.

Schumer told us he's a huge fan of the G-Men and it pains him to say it ... but the smart money's on the boys in Washington ... not the guys in New York.

The Giants don't take the field again 'til October 21st ... so, as Schumer points out, it could be a matter of scheduling. 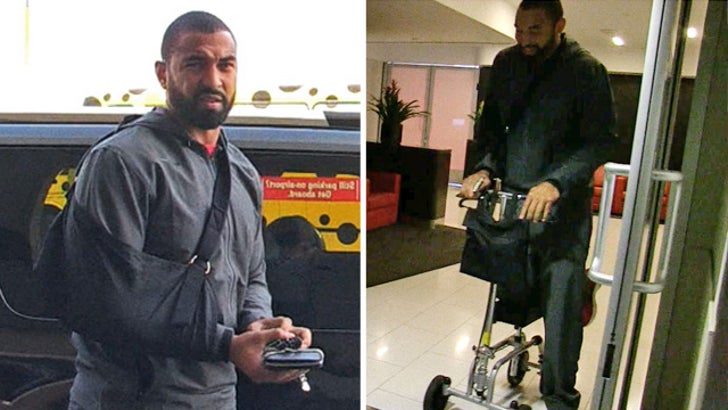 It's bad enough that he can't play, but injured Dodgers star Matt Kemp isn't traveling with the team either -- and TMZ has video of the All Star gimping his way through LAX today on a scooter.

With the rest of the squad already in St. Louis for the NLCS, Kemp -- nursing two injuries -- wheeled through the airport Thursday afternoon on a medical scooter designed to help him keep the weight off his busted right ankle.

Kemp seemed pretty bummed out about the situation -- and for good reason -- telling us that having to ride around on the scooter, while the rest of the guys are prepping for the Cards, straight up blows.

But don't feel too bad for Matt -- he still raked in roughly $20 million this season ... so it's not a total loss.

Still sucks to be injured though. 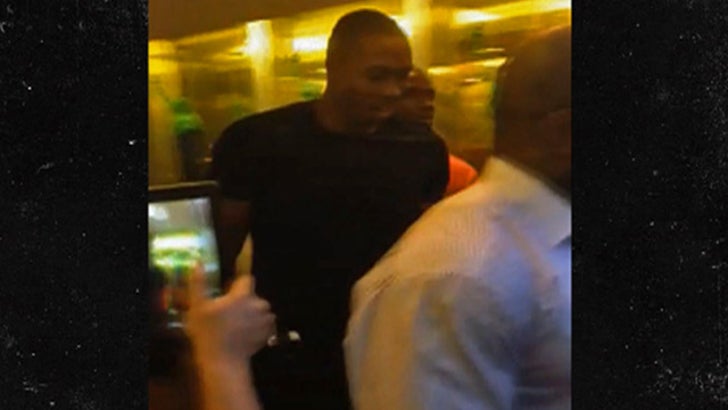 You don't go to Italy and not eat the pasta, you don't go to Japan and not try the sushi ... and Dwight Howard knows you can't go to the Philippines and not hit up the karaoke nightclubs.

The 6'11" Houston Rockets star has been in the Philippines to play a couple of NBA exhibition games ... but a few nights before he hit the court, Dwight blew off some steam at one of the country's most famous karaoke clubs.

In fact, roughly SIX people have been MURDERED in the Philippines over disputes stemming from someone botching Frank Sinatra's version of "My Way" during a karaoke sesh.

Fortunately, Dwight didn't have that problem .. and emerged unscathed after spending his Monday night in the V.I.P. section of the Liberty Island karaoke bar in Manila.

We're told Dwight had a blast -- with dancing and full bottle service. We're told Howard was very cool inside the club and even signed some autographs for some of the staffers.

Dwight didn't play ball until Thursday ... and put up 9 points and 3 rebounds in 24 minutes against the Pacers.

Don't judge, it's only pre-season. 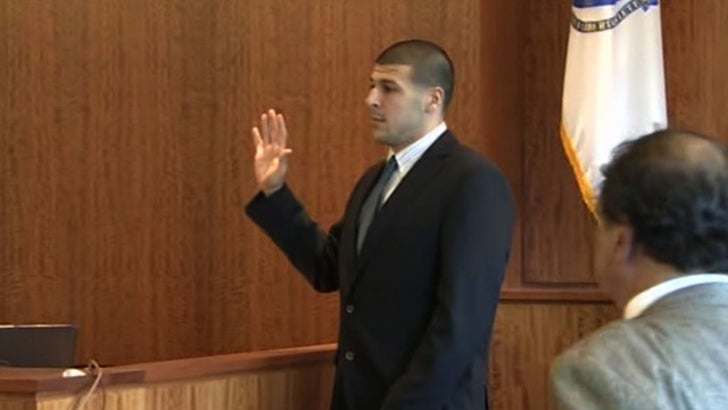 During the hearing, the judge peppered Hernandez with a barrage of questions about his overall health and mental state. Hernandez -- who was pretty composed on the stand -- insisted he's A-OK.

Hernandez has pled not guilty to the murder of 27-year-old Odin Lloyd.

If convicted ... Hernandez faces life in prison. When asked if he understood the gravity of the situation, Hernandez told the judge he got it. 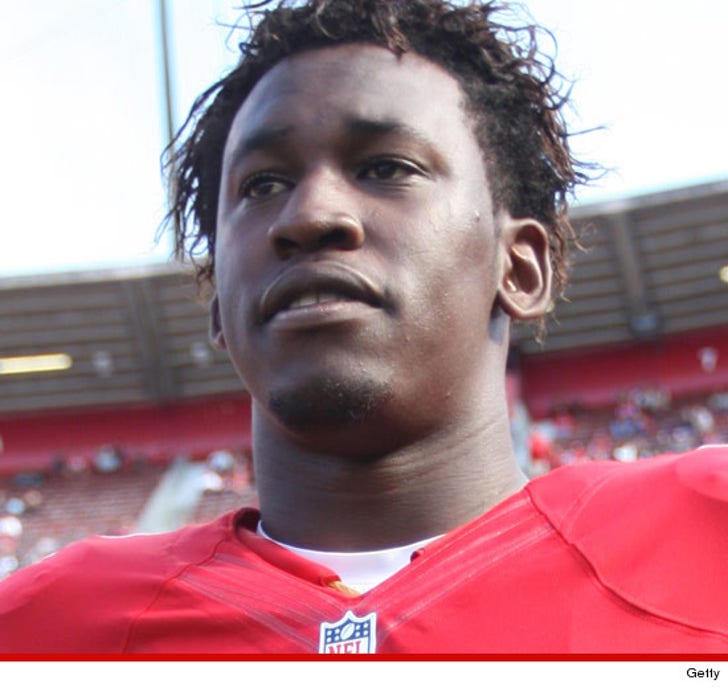 San Francisco 49ers superstar Aldon Smith has reportedly been hit with 3 felony charges for possession of ASSAULT WEAPONS ... stemming from a shooting at his home back in 2012.

Smith -- who's currently in rehab following a DUI last month -- was stabbed at a party at the NFL star's 8,000 square foot home in San Jose, CA. Two other people were shot that night.

The identity of the shooter is unknown -- but officials do say there were several guns found in Smith's home, including 3 kinds of assault rifles (below) which are illegal in California ... and an unregistered .45 handgun.

According to cops, Smith fired the handgun into the air several times during the party, but did not hit anyone. They say the unknown shooter later used the same handgun.

Just two weeks ago, the two alleged shooting victims filed lawsuits against Aldon -- but never accused the football player of firing the shots that struck them that night. 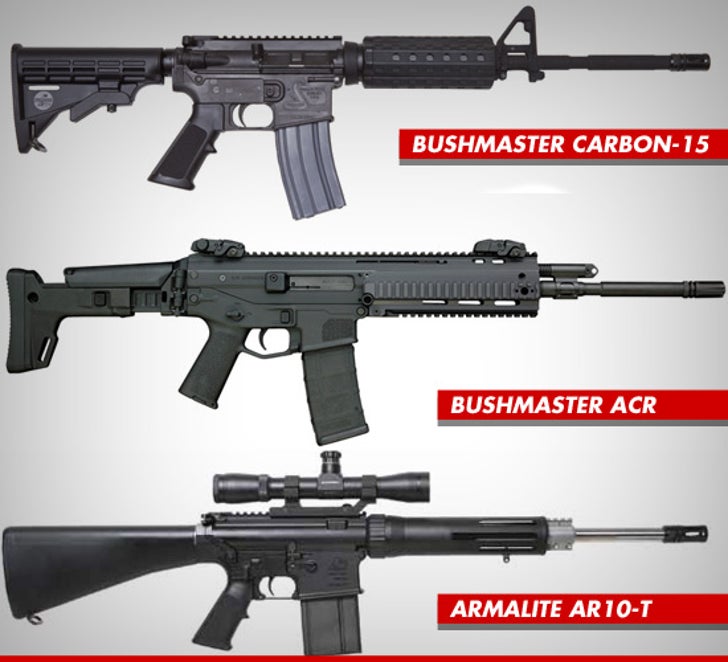 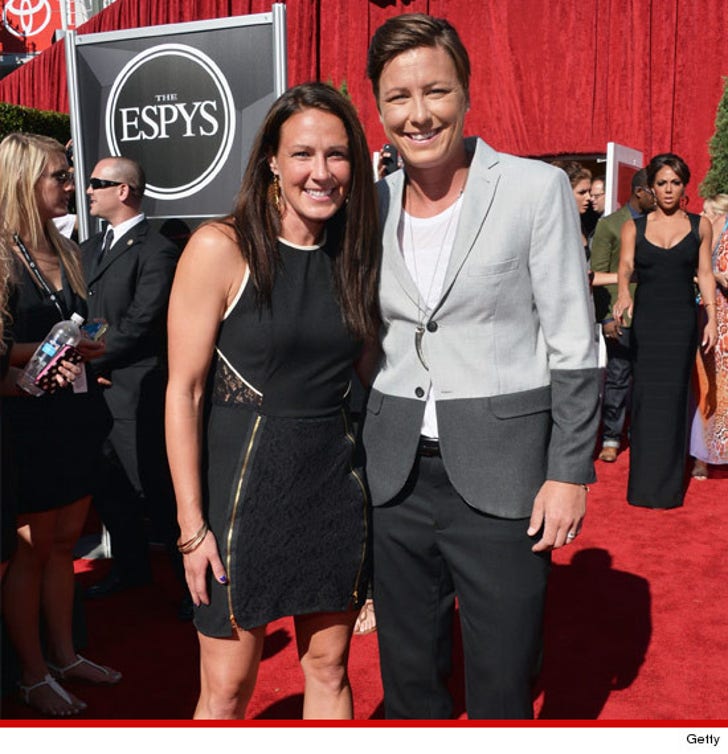 Abby Wambach is officially off the market ... TMZ has learned the Team USA soccer superstar got hitched to her longtime girlfriend this weekend at a fancy resort in Hawaii.

Multiple sources confirm ... Abby and pro soccer player Sarah Huffman swapped "I dos" on Saturday at the Villas at Po'ipu Kai on the island of Kauai.

We're told the ceremony went down at sunset ... right on the beach ... in front of the couple's closest friends and family members.

Sources say it was a very intimate gathering -- attended by several members of the Team USA soccer team, including Alex Morgan and Sydney Leroux (see below). 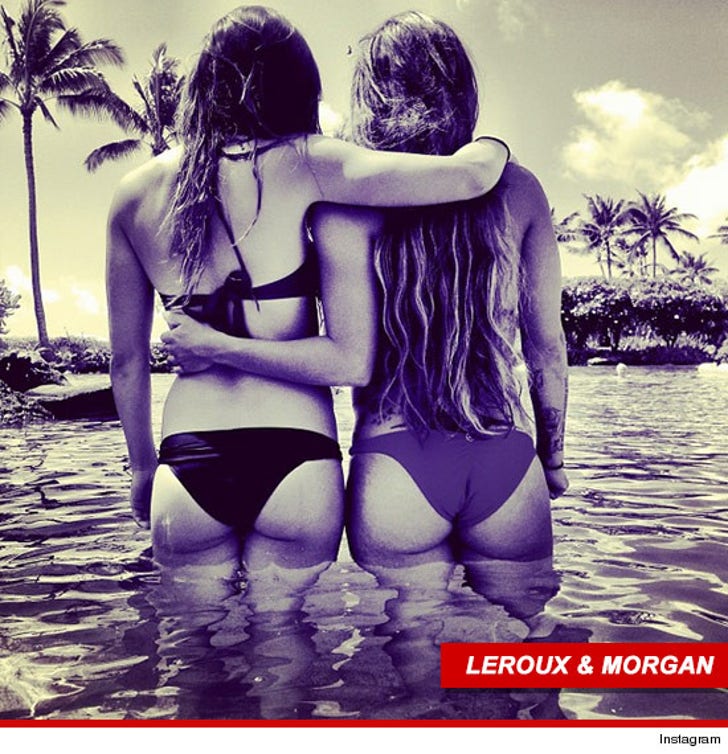 The couple -- and their guests -- spent the past few days doing all sorts of fun activities, including hikes, cliff diving and even a boat trip.