Mel Gibson's lawyer claims the actor has opened his wallet to Oksana Grigorieva since their baby was born, but now that she's allegedly breached their custody agreement Mel's gonna get a little stingier. 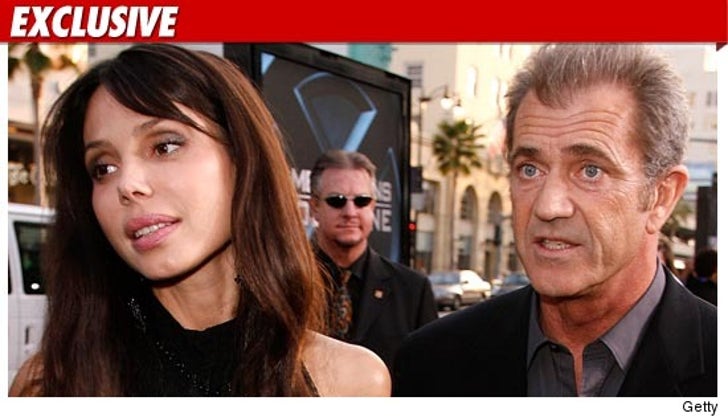 Mel's lawyer, Stephen Kolodny, tells TMZ Mel has opened the bank vault for Oksana ... putting her up in a multi-million dollar house, buying her a car, providing health insurance and "giving Oksana tens of thousands of dollars to support her and Lucia over the past months."

Kolodny says Mel has gone far above and beyond what's required of him under a support and custody agreement the former couple reached in mediation.

But now, Kolodny claims Oksana has violated the agreement by refusing to let Mel see their daughter on Father's Day, Mel is only going to pay Oksana what they agreed to in mediation and not a penny more.

Kolodny wouldn't say how much Oksana is legally entitled to under mediation, but sources tell us it's "well over $10,000 a month." 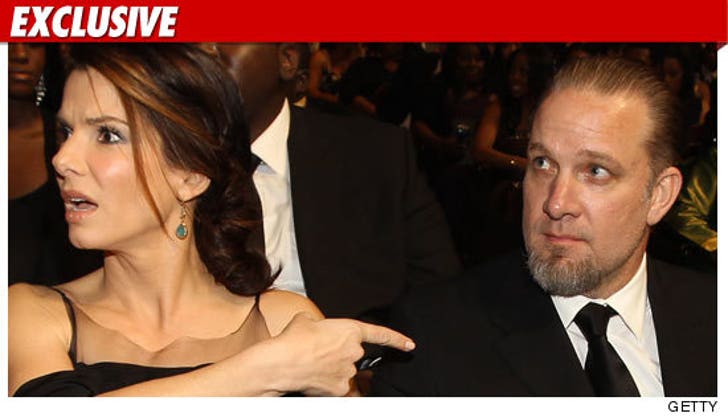 Sources tell TMZ both Sandra and Jesse signed the final documents last week. Sealed documents have been filed with the clerk's office in Travis County, Texas -- sources tell us they are the papers making the divorce final.

Sandra filed for divorce back on April 23, saying the marriage "has become insupportable because of discord or conflict of personalities."

And sources say the divorce clears the way for Sandra to complete a single parent adoption.

Katherine Jackson's quest for money may have just cost her dearly ... because TMZ has obtained legal papers from a South Korean newspaper that is going after everything she makes ... until she pays off a $13 million debt. 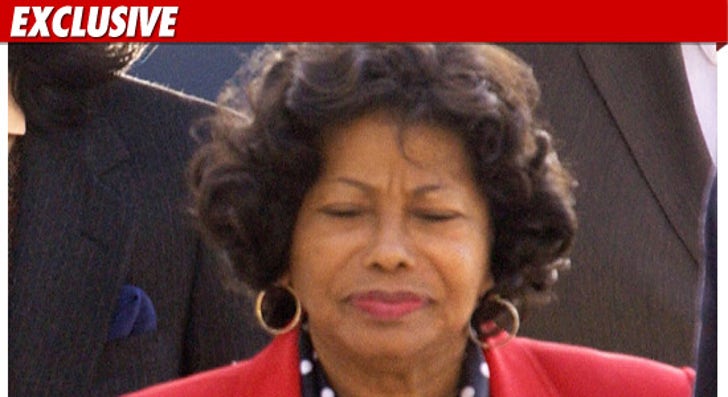 Segye Times, a South Korean newspaper, filed papers with the Michael Jackson estate, informing the court it got a judgment against Katherine in 1994 for $4 million. That's when the newspaper advanced Katherine, Joe and Jermaine $5.5 million for a series of Jackson family concerts that never took place.

Segye claims with interest the judgment now exceeds $13 million, and it wants an order from the judge forcing the estate to pay Segye any money the estate might pay Katherine.

Now here's how Katherine screwed herself. By making all the deals she's been making -- for books, gala events and such -- she's made it clear to the world her goal is to roll in dough and Segye has taken notice.

Joe Jackson is exploiting his son's death in every way he can, raking in the dough, so it makes sense he's just withdrawn his request for an allowance from the estate. 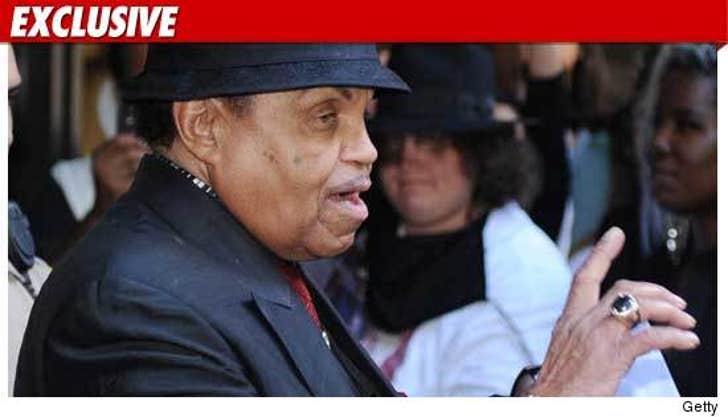 No way was the judge going to give Joe an allowance, but now we know what he wanted and what the estate was willing to give.

In the end, Joe will probably do better on the side. 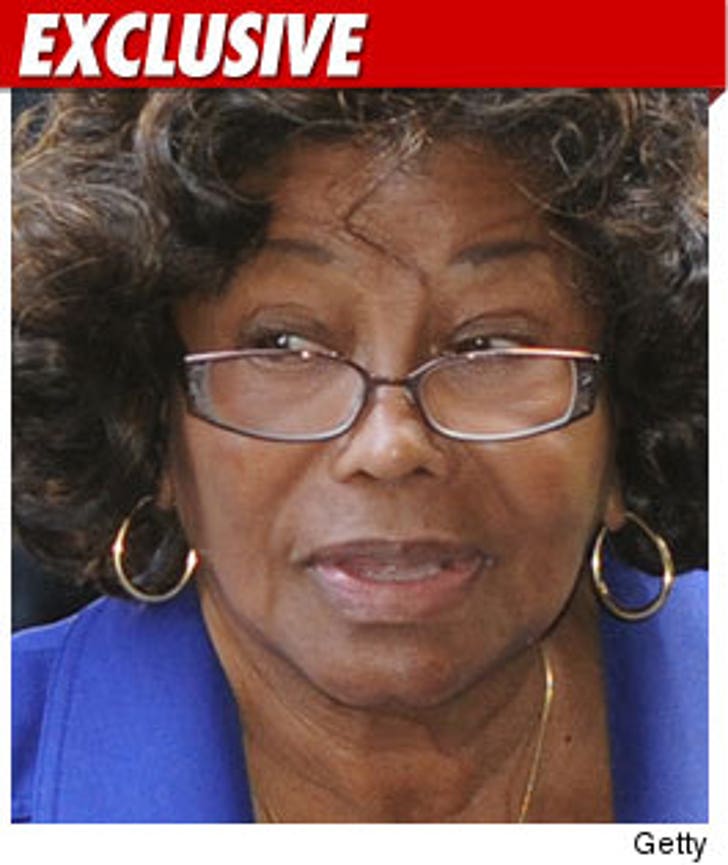 Katherine Jackson has a problem she may not realize -- while she's raking money in from various Michael Jackson businesses, the judge in the MJ estate case could shut her out of a huge monthly allowance the MJ estate has been providing.

TMZ first reported ... Katherine and Joe Jackson sponsored a ritzy Michael Jackson event at the Beverly Hilton Hotel Saturday night -- with tickets going as high as $500 a pop -- and if there are profits, we're told some of that will line her pocket.

And then there's the book she's hawking -- "Never Can Say Goodbye" -- co-authored by Howard Mann, who made a fortune off of nude online gambling.

Mann tells us he's going into other businesses with Katherine as well. Roger Friedman from Showbiz411.com says he's seen a contract between Mann and Katherine which guarantees her $10,000 a month for promoting a book in the works, "The Katherine Jackson Story." Mann claims Katherine will net $10 mil from the book.

Now here's the problem ... When the judge in the Michael Jackson estate case signed off on Katherine getting more than $26,000 a month, it was based on need. If she's making money on the side -- especially making money off her late son -- it's likely the judge will no longer see the need to fill Katherine's wallet. 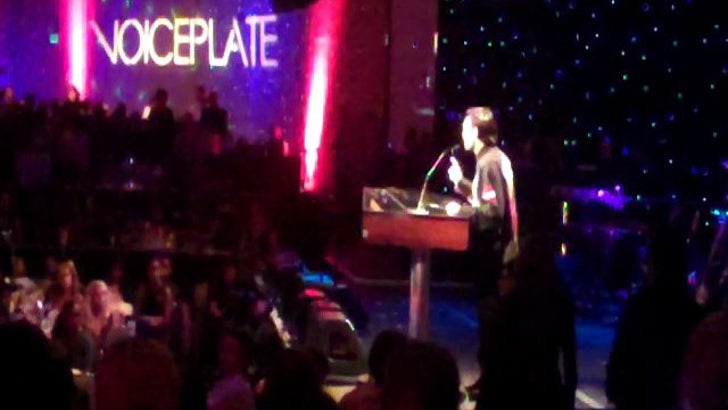 Much to the delight of anyone with eyes, Mariah Carey decided not to purchase that hideous Michael Jackson living room set that went up for auction. 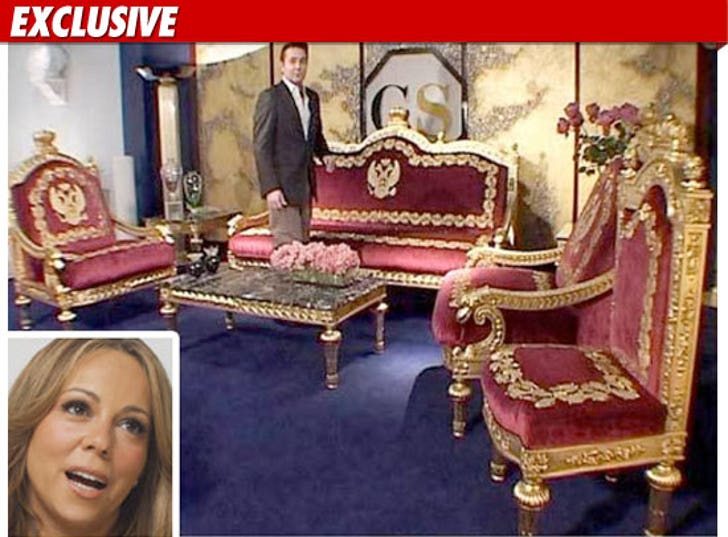 Mariah sent her interior designer, Kenneth Bordewick, to the event held by Julien's Auctions in Las Vegas on Friday. We're told the sofa ended up going for $120,000 and the armchairs went for $40,000 ... but Mariah's representative didn't bid on a single item.

A rep for the rest of Mariah's furniture tells TMZ, "We are glad things transpired the way they did. We wish the sofa and armchairs nothing but the best."

Sources close to Lindsay Lohan tell TMZ her new assistant just didn't cut it -- and not one, but two of her ex assistants are angling to come back.

We're told the new guy "couldn't keep up" and he (pictured 2nd) and LiLo have already parted ways. We're told Eleonore (pictured 3rd), the assistant who quit two weeks ago, wants her gig back because she needs to pay her bills and can't afford to be sidelined any longer.

But get this -- Lindsay's assistant from her glory days, Jenni (pictured 4th), is also interested in an encore. We're told the job pays waaaaaaaaaay less than it did back in the day, but Jenni is also in dire need of work.

Oh ... Jenni and Eleonore happen to be roommates. Awk-ward! 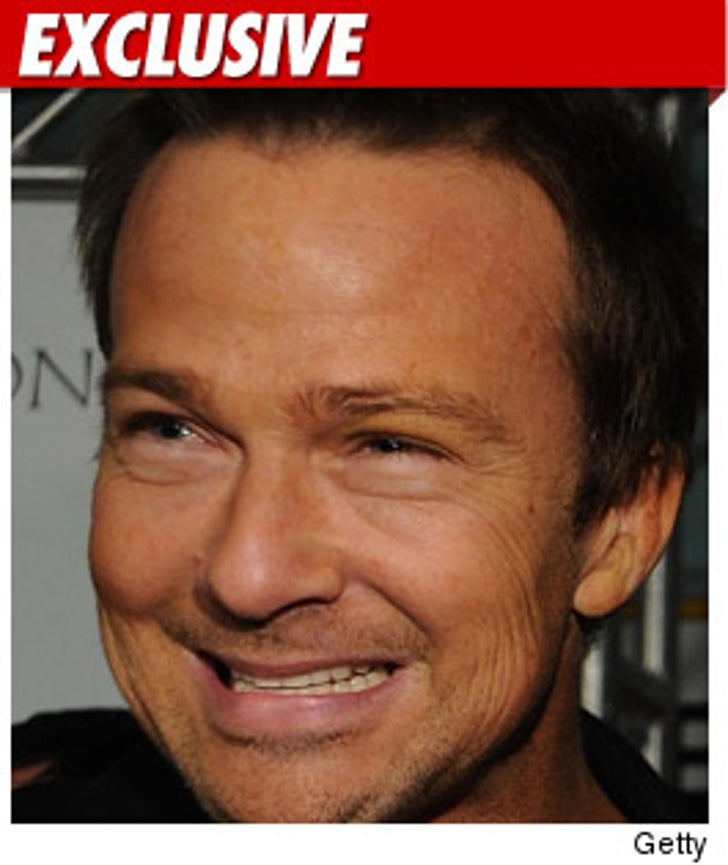 Sean Patrick Flanery -- who played one of the trigger-happy MacManus brothers in "Boondock Saints" -- may have more of the Lord's work to be done ... because the actor allegedly owes more than $64k in back taxes.

According to paperwork issued by the State of California Franchise Tax Board -- Flanery stiffed the broke-ass Golden State out of $64,684.38 between 2003 and 2008.

We called Flanery's peeps for comment -- so far, we got nothin'.

Not so funny now, funnyman.

Former NBA star-turned-announcer Jalen Rose is weighing in the debate over the greatest Los Angeles Laker of all time ... and shockingly -- he didn't pick Kobe Bryant or Magic Johnson. 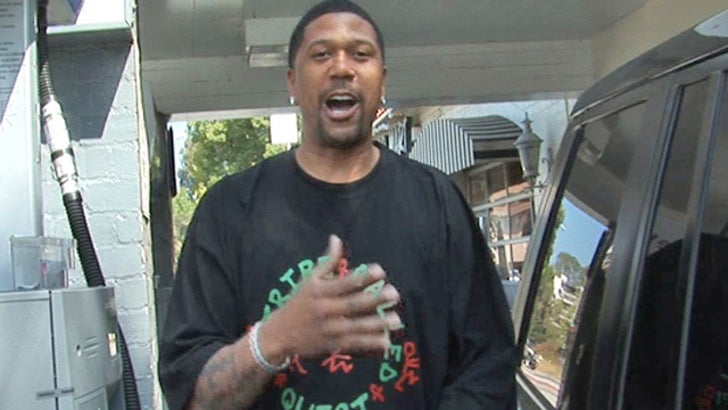 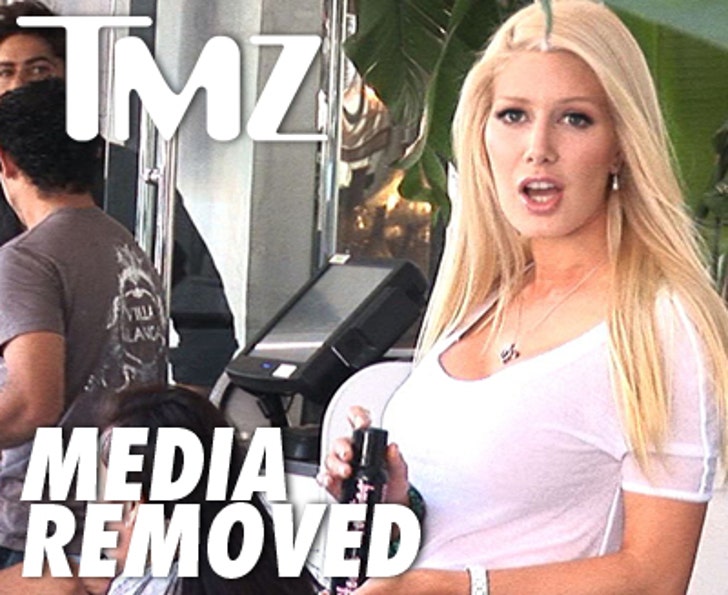 We're told Tiger Woods' #1 lady went to Norma Bouza -- of the famous Cristophe Salon -- to get locked up.

The first shipment of Katherine Jackson's coffee table book about Michael Jackson isn't exactly flying off the shelves in Gary, Indiana. In fact the books never even made it to the shelves, because they were stolen. 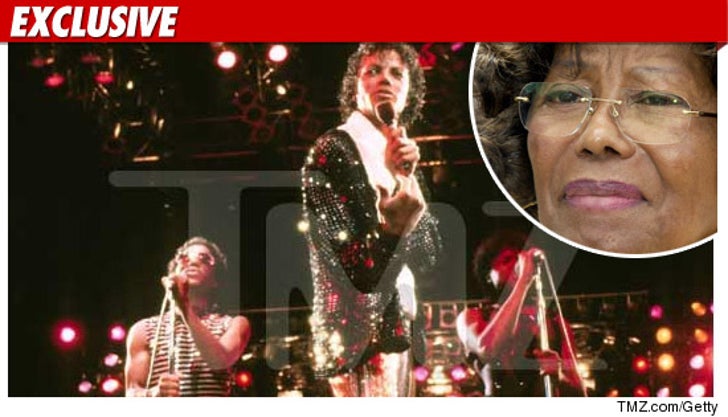 A rep from the publisher, Vintage Pop, tells TMZ they FedEx'd seven boxes of "Never Can Say Goodbye" to the home of a Jackson family friend in Gary ... and they were supposed to end up for sale at the new MJ monument. But someone absolutely, positively wanted them so badly, they stole them right off the front steps of the house where they were left.

We're told a police report was filed with the Gary PD.

Lindsay Lohan is flirting with danger by spray tanning, after being warned it could trigger a positive alcohol reading with the SCRAM people.

Multiple sources say people have told Lindsay she can't get a spray tan while she's wearing the bracelet, because a chemical in the tanning solution can create a reading which would show the presence of alcohol.

Lindsay's response to that warning -- we're told she's still getting a spray tan 1 to 2 times a week.

And it gets worse. We're told the famous probationer is "climbing the walls" ... and is "filled with anxiety" because of the mandatory accessory.

Sources tell TMZ Lindsay was OK with it the first week, but the bracelet started digging into her skin, irritating it. As one person put it, "She's made life hell for the people around her, since she is in pretty bad pain."

And Lindsay's 24th birthday is July 2, and she doesn't like the accessory.

Lindsay wants the bracelet off, we're told, even before her July 6 hearing. Ain't no way Judge Marsha Revel would even hear of it.

A load of sunflowers were just delivered to Michael Jackson's mausoleum at Forest Lawn Cemetery. 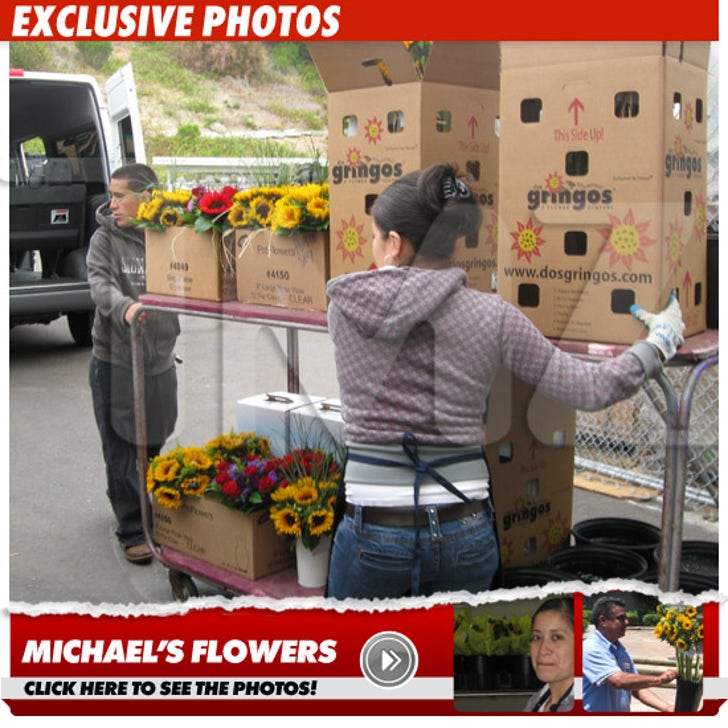 Sunflowerguy.com just delivered 600 single-stemmed sunflowers with individual messages attached to them, along with 100 individual sunflower bouquets and 4,000 roses.

The flowers were dropped 100 yards from the mausoleum, because of construction on the grounds.

TMZ has learned Michael Jackson's family -- minus his mom and his kids -- will be making a trek to Forest Lawn Cemetery tomorrow at 11 AM, to pay their respects.

We're told following the service, there will be a reception at a private estate in Beverly Hills -- not too far from where Michael was living a year ago when his heart stopped beating. 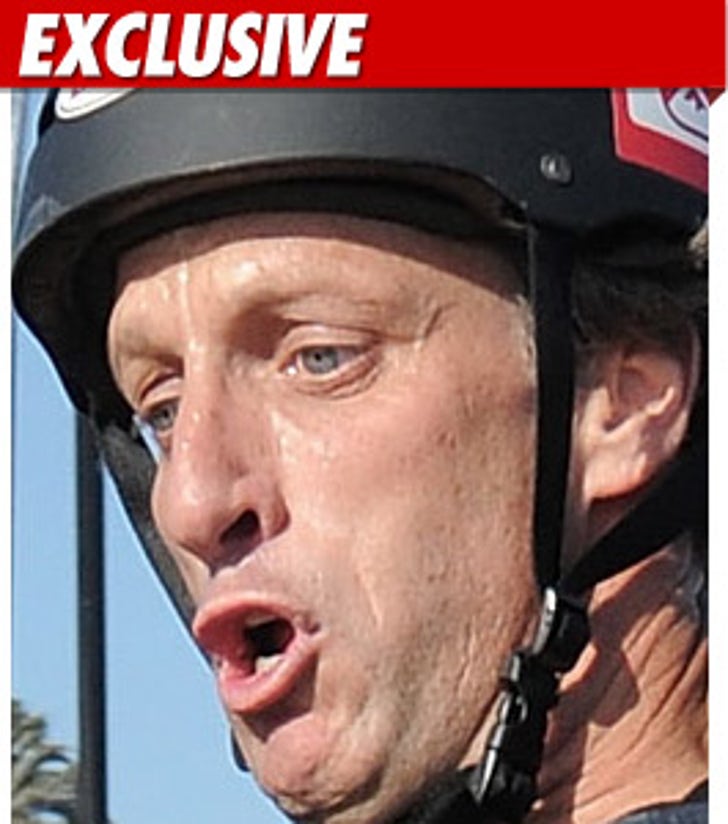 Tony Hawk is suing over one of the coolest products he ever put his name on -- a digital helmet cam -- claiming the people behind the device are total frauds.

In the suit, Hawk alleges when he signed the deal in 2005, Prime Entertainment "had no intention" of actually paying the guy what they promised. Instead, Hawk states he only received $35k of the $150k he was owed.

Now, Tony is suing for the remained $115k -- plus punitive damages -- citing breach of contract and fraud.